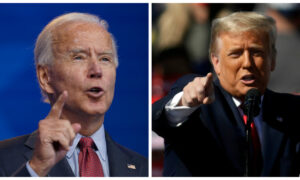 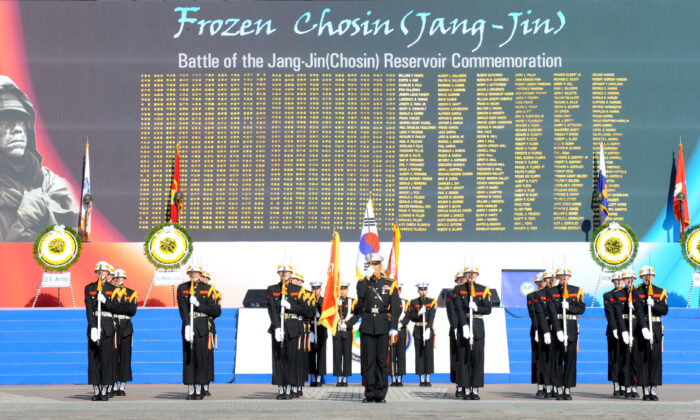 A South Korean Marine honor guard holds a ceremony for the Battle of the Chosin (Jangjin) reservoir commemoration in Seoul on Nov. 10, 2010. (Park Ji-Hwan/AFP via Getty Images)
Viewpoints

“These are the times that try men’s souls,” wrote Thomas Paine December of 1776. “The summer soldier and the sunshine patriot will, in this crisis, shrink from the service of his country; but he that stands it now, deserves the love and thanks of man and woman. Tyranny, like hell, is not easily conquered; yet we have this consolation with us, that the harder the conflict, the more glorious the triumph.”

For American revolutionaries facing the extremely uncertain prospect of defeating the most powerful military machine on earth at that time, the situation must have already looked hopeless. The Continental Army under George Washington had lost New York City and was perched uneasily on the Pennsylvania side of the Delaware River. Desertion was rife. The weather was ghastly. It looked like a last stand would soon be in the offing.

And yet, against all the odds, the Americans won. Why? What possessed them to carry on, in the face of almost certain defeat? What, exactly, were they fighting for? God? Country? Their women and children? Or something more elemental, masculine, primal?

Times that try men’s souls, indeed. Paine’s words, which inspired the colonists to revolution and shamed the shrinking violets who would not fight, are just as applicable today—as the nation has been plunged into crisis by an overbearing government, a manufactured health “crisis,” open attacks on life, property, and the Constitution, and a contested, possibly fraudulent election, are just as pertinent today as they ever were.

To address elemental questions such as these, I have written a new book, “Last Stands: Why Men Fight When All is Lost,” published today by St. Martin’s Press. It’s a study of famous, and not-so-famous last stands from the Spartans at Thermopylae to the Marines at the Chosin Reservoir—the 70th anniversary of which battle is occurring this week.

Among the other battles are the Romans at Cannae, the Jews at Masada, Roland at the Roncevaux Pass, Hastings, the Alamo, Grant at Shiloh, Custer at the Little Bighorn, Gordon at Khartoum, and the experiences of the Second Battalion, Fifth Marines (the most decorated in USMC history)—in North Korea.

One of those Marines, a 24-year-old first lieutenant, was my father, John Walsh, still going strong today at age 94. His Bronze Star citation for heroism reads in part: “Directing effective mortar fire from his new position, he contributed materially to the infliction of heavy causalities upon the enemy and to the eventual destruction of the hostile force.”

The early reviews have been very satisfying. Caleb Carr, the celebrated author of “The Alienist” and an outstanding military historian, called “Last Stands”: “An unrelenting and rousing account of one of humanity’s most laudable wartime phenomena, and a book that hurls a gauntlet at the feet of a contemporary culture which, despite our living in a world that is still violently challenging, fails to find nobility in self-sacrifice. It engages in the very best sense.”

Another military expert (and veteran Marine Corps officer) Mackubin Owens, said: “There is no more astute chronicler of the relationship between culture and politics than Michael Walsh. In ‘Last Stands,’ he offers a philosophic examination of the nature of honor and its relation to masculinity, a topic that runs against the main current of contemporary discourse. But challenging a culture characterized all too often by ‘men without chests,’ Walsh celebrates honor and its corollary, heroism, as they have manifested themselves in hopeless battles…”

The eminent Victor Davis Hanson wrote: “‘Last Stands’ is a thoroughly original study of doomed or trapped soldiers often fighting to the last man… a philosophical and spiritual defense of the premodern world, of the tragic view, of physical courage, and of masculinity and self-sacrifice in an age when those ancient virtues are too often caricatured and dismissed. A much needed essay on why rare men would prefer death to dishonor, and would perish in the hope that others thereby might live.”

As you can see, this is book about men, and a celebration of “toxic” masculinity. “War is at root a masculine engagement,” I write, “undertaken on behalf of females and children—in large measure to win and protect the former and to ensure the survival of the latter—a truth not lately much told or acknowledged.”

War is brutal; war is bloodshed; war is hell. In these pages, heads go flying, limbs are lopped off, bodies are blown apart by cannonballs and canister. They die of starvation; they freeze to death. At Cannae in 216 BC, when the mightiest Roman army in history was wiped out by Hannibal, a dead Roman soldier was found with the nose of his Numidian opponent in his mouth. At the end of the first day at Shiloh, Grant recalled there were so many corpses that you could traverse the battlefield and never set a foot on the ground.

No matter the beating you took, however, your job was to survive and inflict as much damage on the enemy as possible. As Patton famously said, “No bastard ever won a war by dying for his country. He won it by making the other poor dumb bastard die for his country.”

Certain themes run through all these battles, and certain lessons. Probably the most important is a maxim soldiers call “doing your job.” Even against all odds, you maintain discipline, follow your training, and fight to the end. If you do, you might live. If you don’t, you almost certainly will die. When I asked my dad whether he was scared when hundreds of thousands of Chinese soldiers suddenly attacked the Marine and Army positions near the Reservoir, he looked at me and said, “we went to work.”

So why do men fight when all seems lost? “Men fight for power, for love, for sex, for money, for wealth and possessions,” I note. But in the end, they fight for themselves and their brothers-in-arms.

The Greeks blocked the westward expansion of the Persian Empire, allowing Alexander the Great to eventually destroy it. In 1527, during the Sack of Rome, a handful of Swiss Guards saved the life of Pope Clement VII from an army of enraged German Lutherans and died nearly to the last man—but the Catholic Church survived. At the Battle of Camarón in Mexico in 1863, the French Foreign Legion was nearly annihilated—but the Legion won its spurs and its legend.

Even in today’s feminized, soy-boy, safety-first world, there are still some things worth dying for, and real men know what they are. Because sometimes not all is lost, unless we wish it to be.

As Paine said, tyranny, like hell, is not easily conquered. But somebody’s got to do it.

Michael Walsh is the editor of The-Pipeline.org and the author of “The Devil’s Pleasure Palace” and “The Fiery Angel,” both published by Encounter Books. His latest book, “Last Stands,” a cultural study of military history from the Greeks to the Korean War, is out this week.