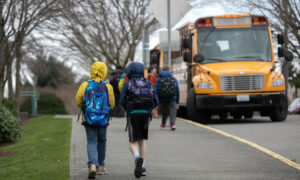 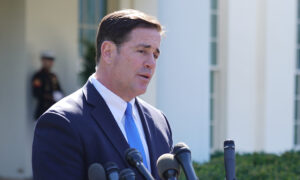 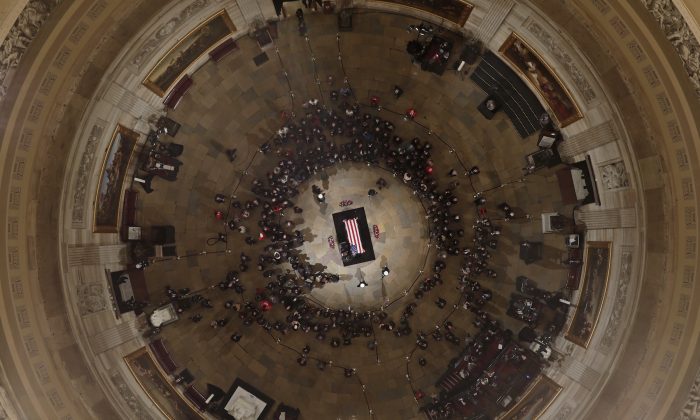 Members of the Bush family gather near the casket of Former President George H. W. Bush as he lies in state in the U.S. Capitol Rotunda in Washington DC, Dec. 4, 2018. (AP Photo/Morry Gash, Pool)
US News

WASHINGTON—President George H.W. Bush is getting a national farewell at Washington National Cathedral before family, friends, presidents and foreign dignitaries.

The nation’s 41st president died Friday at age 94. His wife of 73 years, Barbara, passed away in April.

Things to know about the event on Dec. 5:

Bush’s casket has been lying in state in the U.S. Capitol rotunda since Monday, with a river of mourners passing through around the clock. The viewing comes to a close at 7 a.m. EST Wednesday. The casket and the family will arrive at the cathedral just before 11 a.m., when the service is expected to begin.

The service is closed to the public, but will be aired live on C-SPAN and covered by major television networks.

Look for much discussion of Bush’s legacy of decency, humor, and a determination to avoid referring to himself with the pronoun “I.”

Who Will Be There

All eyes will be on the row directly in front of the pulpit. That’s where President Donald Trump and his wife, Melania, are expected to sit, along with the remaining former presidents and their families: George W. Bush, Jimmy Carter, Barack Obama, Bill Clinton and his wife Hillary Clinton.

Also attending: Britain’s Prince Charles, the king and queen of Jordan, Polish President Andrzej Duda and other dignitaries from around the world. Look, too, for some of the graybeards from the late president’s administration.

Bush And The Cathedral

The late president played an important role in the history of the cathedral chartered by Congress in 1893.

On Sept. 29, 1907, President Theodore Roosevelt laid the foundation stone. Exactly 83 years later, Bush was there when the final stone was laid in place.

Bush said at the time: “We have constructed here this symbol of our nation’s spiritual life, overlooking the center of our nation’s secular life, a symbol which combines the permanence of stone and God—both of which will outlast men and memories.”

Bush is the fourth president to have his state funeral at the site, according to the cathedral. The others were Dwight D. Eisenhower, Ronald Reagan, and Gerald Ford. Seven other presidents had memorial services there.

A Bit About State Funerals

For U.S. presidents, there’s a whole list of customs, protocols and military honors that influence a national farewell, but much of the affair is subject to the family’s wishes. The president’s survivors are entitled to a military escort for the immediate family, for example, until the remains are buried. A nine-person team that carries the casket is another option. And a flag-draped casket is an honor afforded military veterans and the president as commander in chief.

Bush was a veteran of World War II.

Bush’s casket will return to Texas late Wednesday for the last time.

He’s expected to lie in repose at St. Martin’s Episcopal Church in Houston until 7 a.m. EST Thursday. The church will also hold its own memorial service for the former president later that morning.

A motorcade will take Bush’s body to Union Pacific Railroad Westfield Auto Facility, where a funeral train will transport the late president’s remains to Texas A&M University in College Station, Texas. He’ll be laid to rest on the grounds of the George H.W. Bush Presidential Library and Museum, near his wife, Barbara, and their daughter Robin, who died of leukemia in 1953 at age 3.