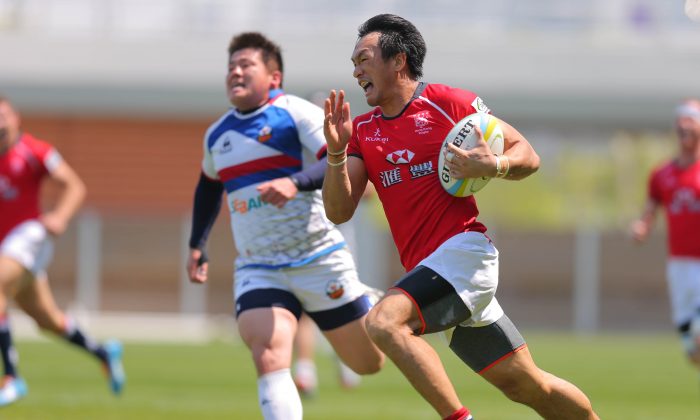 Hong Kong’s Salom Yiu Kam Shing breaks away for the game winner in stoppage time in their Asian Series against Korea in Incheon on Saturday May 16, 2015. (ARFU)
HK Rugby Union

Hong Kong snatched victory from the jaws of defeat on Saturday May 16, beating South Korea in Incheon with a try in extra-time, by Salom Yui kam-shing. Hong Kong won 38-37, and was a deserved homage to playing to the final whistle and the inherent belief that it ain’t over until the fat lady sings.

Hong Kong expected a tough match: and Korea again took early control of proceedings, as they did when the two teams met earlier in the season in Hong Kong. By half time, Korea led 19-12, with two tries from their flanker and captain Kim Jeong-min, and another from winger Bin Jegal. Hong Kong scored twice, one from Salom Yui kam-shing, and the other from Toby Fenn. Korea’s second try came during the sin-binning of Hong Kong prop Jack Parfitt: and that would be an ominous warning to both teams that playing with a man disadvantage is expensive.

Korea began the second half aggressively, and soon stretched their lead to 29-12. A 70 metre intercept try by winger Chang Yong-heung, and a drop goal by fly half Oh Youn-hyung, gave Korea a comfortable lead, requiring Hong Kong to score at least three times.

On 50 minutes, the game shifted. Korean prop Kim Kwang-sik, was red-carded, reducing Korea to 14 men. Tyler Spitz clawed one try back for Hong Kong, reducing the deficit to 29-17. A penalty to Korea put the score out to 32-17, before Paul Dwyer scored another for Hong Kong, closing the gap to 32-24…almost touching distance. Korea responded with a try by Kim nam-uk, and at 37-24, the game looked secure for a Korean victory.

On 78 minutes, Hong Kong’s inspirational captain, Nick Hewson scored a try, which was converted, to make the score 37-31. Hong Kong had a fighting chance of victory.
Then on 80 minutes the sin-binning of Kim nam-uk, reduced Korea to 13 men, and Hong Kong sensed that chance of victory could become a certainty. Good ball retention, discipline and opportunism, enabled Salom Yui kam-shing to score under the posts, and Niall Rowark converted, and Hong Kong had won 38-37.

Hong Kong will deservedly celebrate: their tenacity, fitness and superior discipline meant that over the full course of the game they won. Korea will rue their own ill-discipline, and must learn to close games out. They nearly came unstuck in earlier match in Hong Kong, but this time, unhinged themselves with ill-discipline to allow a probable victory when leading 29-12, to become a certain defeat, 37-38 at the final whistle.

Next week, in the last round, it will be about points difference to determine second and third place in the Asian Rugby Championship. Japan is already the champion. Hong Kong has a 29 point advantage over Korea. It will be tough to contain Japan, even tougher to win a bonus point, but Hong Kong will have taken heart this weekend. They know they have the match fitness and mental strength to contest these matches and aware what they need to do against Japan. All they have to do is go out and just do it!