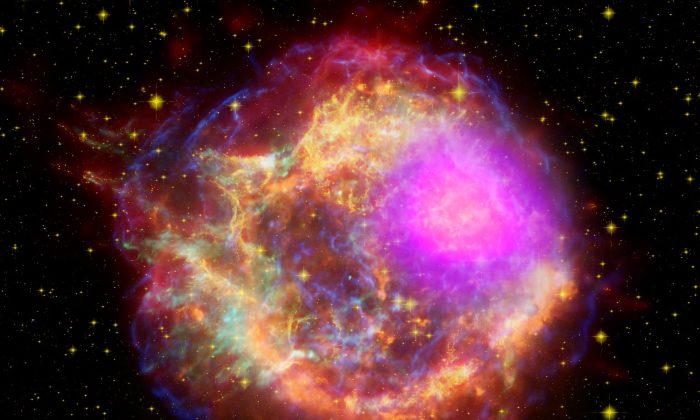 This composite shows the Cassiopeia A supernova remnant that has magnetic fields that are approximately 100 times stronger than those in adjacent interstellar space. (NASA/DOE/Fermi LAT Collaboration, CXC/SAO/JPL-Caltech/Steward/O. Krause et al., and NRAO/AUI)
Science

At the Vulcan laser facility in the UK, scientists recreated a supernova in an attempt to find out more about the origin of magnetic fields.

They did it by focusing an incredibly power laser beam—60,000 billion times more powerful than a laser pointer—onto a small carbon rod sitting in a chamber filled with a low-density gas.

The lasers generated temperatures of a few million degrees and made the rod explode, creating a blast that expanded throughout the gas. That exploding rod allowed the team to recreate the kind of turbulence that amplifies magnetic fields in space.

“Magnetic fields are ubiquitous in the universe,” says Don Lamb, a professor of astronomy and astrophysics at the University of Chicago. “We’re pretty sure that the fields didn’t exist at the beginning, at the Big Bang. So there’s this fundamental question: how did magnetic fields arise?”

Lamb and colleagues are attempting to answer that question with the laser experiments, which they describe in an article published in Nature Physics.

The research was inspired by the detection of magnetic fields in Cassiopeia A, a supernova remnant, that are approximately 100 times stronger than those in adjacent interstellar space.

Supernova on a Small Scale

“It may sound surprising that a tabletop laboratory experiment that fits inside an average room can be used to study astrophysical objects that are light years across,” says Gianluca Gregori, professor of physics at the University of Oxford. “In reality, the laws of physics are the same everywhere, and physical processes can be scaled from one to the other in the same way that waves in a bucket are comparable to waves in the ocean. So our experiments can complement observations of events such as the Cassiopeia A supernova.”

Making the advance possible was the extraordinarily close cooperation between Lamb’s team at at Chicago and Gregori’s team of experimentalists.

“Because of the complexity of what’s going on here, the simulations were absolutely vital to inferring exactly what’s going on and therefore confirming that these mechanisms are happening and that they are behaving in the way that theory predicts,” says Jena Meinecke, graduate student in physics at Oxford and the paper’s lead author.

Magnetic fields range from quadrillionths of a gauss in the cosmic voids of the universe, to several microgauss in galaxies and galaxy clusters (ordinary refrigerator magnets have magnetic fields of approximately 50 gauss). Stars like the sun measure thousands of gauss. Neutron stars, which are the extremely compact, burned out cores of dead stars, exhibit the largest magnetic fields of all, ones exceeding quadrillions of gauss.

This schematic depicts the setup of magnetic field experiments led by University of Oxford scientists at the Vulcan laser facility of the United Kingdom’s Rutherford Appleton Laboratory. (Robert Kozloff/University of Chicago)

In 2012, Gregori’s team successfully created small magnetic fields, called “seed fields,” in the laboratory via an often-invoked effect called the Biermann battery mechanism. But how could seed fields grow to gigantic sizes in interstellar space?

Building on their earlier findings, Gregori and his collaborators at 11 institutions worldwide were able to demonstrate the amplification of magnetic fields by turbulence through the most recent laser experiment.

“The experiment demonstrated that as the blast of the explosion passes through the grid it becomes irregular and turbulent, just like the images from Cassiopeia,” Gregori says.

“The experimentalists knew all the physical variables at a given point. They knew exactly the temperature, the density, the velocities,” says Petros Tzeferacos, a study coauthor and research scientist at Chicago. Tzeferacos and his colleagues incorporated that data into their simulations.

“This allows us to benchmark the code against something that we can see,” Tzeferacos says. Such benchmarking—called validation—shows that the simulations can reproduce the experimental data. The simulations consumed 20 million processing hours on both the Mira and Intrepid supercomputers at Argonne National Laboratory. Mira, which can perform 10 quadrillion calculations per second, is 20 times faster than Intrepid.

With validation in hand, all members of the collaboration could return repeatedly to the simulations to get answers to new questions regarding the physics they saw. “We could look at the velocity instead of the density of the magnetic field, or we might look at the pressure,” Lamb says. “This simulation is a treasure trove of information about what’s really going on. It’s actually critical to understanding correctly what’s really happening.”

The US Department of Energy funded the work.