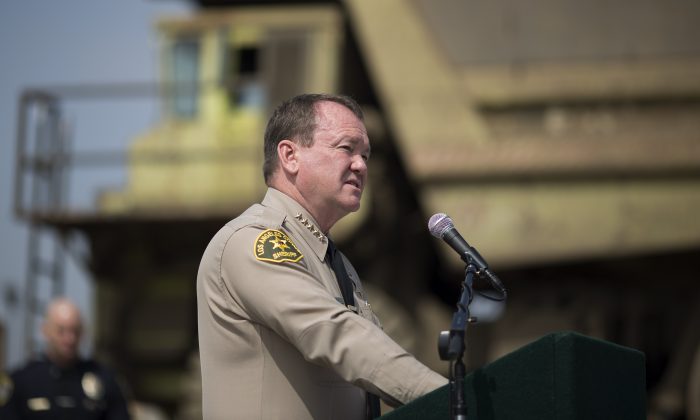 Los Angeles County Sheriff Jim McDonnell announced the launch of a comprehensive study into tattoos and their relation to deputy subgroups in the law enforcement department on Thursday, July 26, at a meeting of the Sheriff’s Civilian Oversight Commission.

The announcement followed recent news coverage regarding a tattoo of a skeleton holding a rifle allegedly shared by some of the deputies stationed in Compton, located near Los Angeles. One of the deputies, who was accused of a racially motivated shooting, said in a recent deposition that 10 to 20 deputies shared the tattoo.

As the largest Sheriff’s Department in the world with about 18,000 employees, such concerns about specific members of the department have surfaced before.

A lawsuit filed in 1991 alleged that some deputies with matching tattoos at the Lynwood station were members of a neo-Nazi, white supremacist gang known as the “Vikings” and accused the deputies of systematically engaging in racial abuse, beatings, unjustified shootings, and other unlawful conduct. The lawsuit was later settled for $6 million to the plaintiffs, while $1.5 million was allocated for use of force training by the LASD.

Other allegations of deputy subgroups date back to the ’70s, said Sheriff McDonnell.

“However, despite all this, no one has undertaken a serious, comprehensive study of the issue. I intend, on my watch, to get to the bottom of it,” he said.

The Sheriff said the department will be partnering with the county counsel and inspector general for the study. At the Civilian Oversight Commission meeting, McDonnell invited the commission and the unions to join the investigation and bring in outside experts to provide their input in how to resolve the issue.

“At the end of the day, everyone, most importantly our public, should be confident that there are no ‘gangs’ of deputies operating subversively anywhere within the department,” said McDonnell.

Group tattoos of law enforcement officers appear to be common and mostly benign. The president of the Association for Los Angeles Deputy Sheriffs was photographed with McDonnell sporting a tattoo on his ankle, which appeared to be a tattoo shared by members of the Firestone station, according to LASD.News.