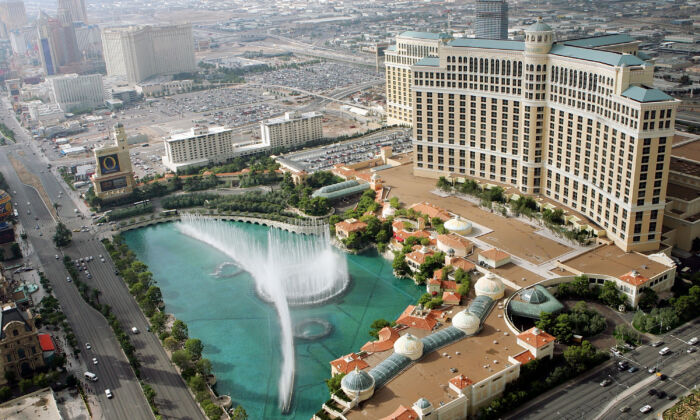 The Bellagio resort in Las Vegas in this file photo. (Ethan Miller/Getty Images)
US News

The Las Vegas Strip in Las Vegas, Nevada, got a rare dusting of snow this week.

The snow reflected the bright lights of casinos and other establishments.

Later in the week, more snow is expected to fall in the U.S. gambling mecca.

Parts of Las Vegas and the surrounding area got about an inch or two of snow, reported the Weather Channel. An inch of snow was reported in Henderson and about 1 to 2 inches in Summerlin.

Snow forced the closure of Interstate 15 on Feb. 18, from State Route 146 on the south end of the Last Vegas Valley to Primm on the California side, the Nevada Highway Patrol said.

“Temperatures tumbled by at least 20 degrees Fahrenheit in 24 hours, leading to light snow. This was the first snowfall in the city since a trace of snow fell in December 2015. Las Vegas averages 0.3 of an inch of snow in a year,” according to AccuWeather.

RARE SNOW ON THE VEGAS STRIP! Snow falling with the bright lights and casinos of the Las Vegas Strip in the background isn’t something you see every day! DETAILS: https://bit.ly/2GVZuA2

“From Buffalo Bills, Primm, to [Seven Magic Mountains], it took us 45 minutes because route 15 was closed,” said Esti Piels, a tourist, Fox5 reported. “We took the back road and found a semi stuck, perpendicular to the road.”

“[The snow] was coming down sideways,” said one driver who was stranded.

“We got out early….We heard about the horrendous closure and how bad it was backed up,” said Kristy Glinski, another tourist, according to the local station. “So we got routed around [to Las Vegas Blvd].”

An inch measured in #Henderson tonight!
Ruler-photo snow measurements are incredibly helpful for us! It helps us to better interpret our radar and provide updated forecasts. 🙂
Make sure it’s a hard, flat surface and we will share your pic! #VegasWeather #NvWx #VegasSnow https://t.co/1txkq4XAsb

Nevada is forecast to have another winter storm after experiencing a weekend storm, as reported by The Associated Press.

The storm over the holiday weekend brought 31 inches of snow to the Heavenly Mountain resort on Lake Tahoe’s south shore, two inches at the airport in Reno and caused snowflakes to fall on the Las Vegas Strip.

#update The road closure on I-15 now extends from State Route 146 to Primm in both directions. Traffic is still being diverted on to Las Vegas Blvd. Expect major delays and avoid the area. #drivesafenv #BuckleUp #DriveSober #NHPSoComm

Higher elevation areas on the western and southern edges of the Las Vegas area received one to two inches of snow.

The storm caused a nearly 5-hour shutdown of Interstate 15 at the Nevada state line on Monday due to multiple accidents related to snow and ice.

It was later reopened.

Another winter storm coming from the Pacific Northwest is expected to arrive on Wednesday and Thursday in Nevada.