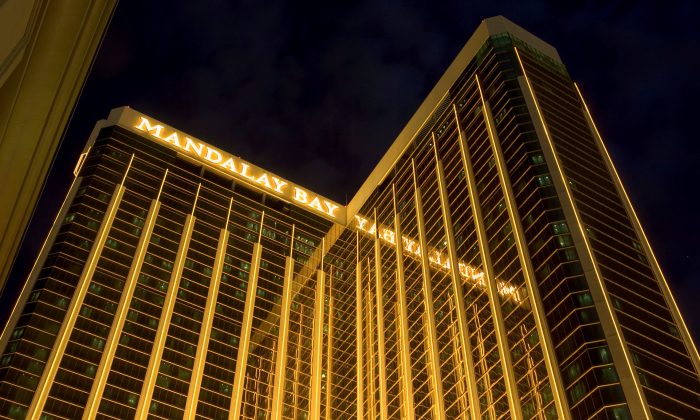 The Mandalay Bay Resort and Casino in Las Vegas in this file photo. (Ethan Miller/Reuters/File Photo)
US News

Las Vegas Shooting Victims Speak Out Against Hotel Lawsuit Against Them

Survivors of the October 2017 Las Vegas mass shooting spoke out against the lawsuits that were filed against them by MGM Resorts International, the owner of the Mandalay Bay hotel.

The hotel was the site of the deadliest mass shooting in modern U.S. history when gunman Stephen Paddock, 64, opened fire on a crowd of country music concertgoers, killing 58 and wounding hundreds more.

Earlier this month MGM filed a lawsuit against the shooting survivors as well as relatives of those who were killed to protect itself from legal claims. The firm wants to move the court fight to a federal court.

“It’s not only insulting, it enrages me to think that this company can just try to skip out on their responsibility and liability for what happened,” said Jason McMillan, who was paralyzed in the shooting, according to the Wall Street Journal.

“I rarely ask for help and I love helping other people,” McMillan, a sheriff’s deputy from Riverside County, California, said at a news conference in Newport Beach on Monday. He was joined by other survivors. “I couldn’t help anybody,” he said.

The lawsuit, he said, brings up bad memories of the attack. “It brings it all up again and takes me right back to being helpless,” he said.

An MGM representative said that it was “heartbreaking to hear these personal accounts of an unspeakable tragedy. No one wins from endless litigation and it will not change the fact that one person is responsible for this horrendous act of violence and he took his own life rather than face justice.”

Another statement read: “Plaintiffs lawyers have filed and refiled dozens of lawsuits, in multiple jurisdictions, in state and federal court. Resolving each case individually would require years of testimony from victims, first responders and employees. We believe Congress determined these cases should be in federal court and that getting everyone in the same court, is the best and fastest way to resolve these cases. As we have said from the beginning, we filed actions involving individuals who have retained attorneys and either have sued or threatened to sue,” Fox5 reported.

In all, the MGM suit names more than 1,000 victims in the shooting.

“The fact that they’re trying to sue us now or that they are suing us, it’s outrageous. I am so pissed,” Joyce Shipp said. She’s the mother of Laura Shipp, who was shot and killed.

“I’ve gotta live without the most important person in my life and you’re gonna try to sue me for that?” Laura’s son, Corey Shipp, told the outlet.

“I’m disgusted in the fact that I’ve already lost my son and now they want to sue me,” Wayne Meyer added.