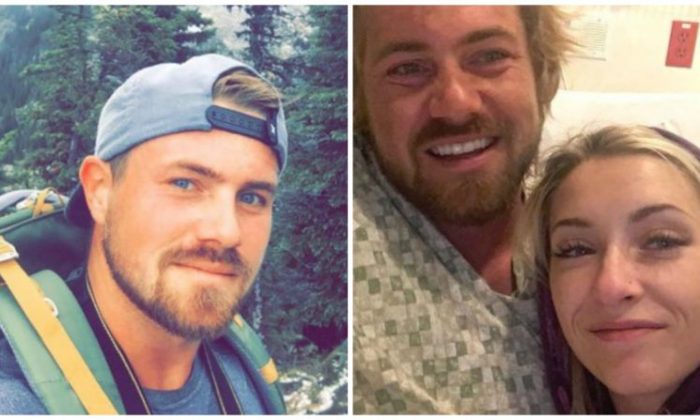 Braden Matejka survived a bullet to the head during the Las Vegas shooting massacre. Now he is receiving death threats from people who believe in a conspiracy theory that casts doubt on whether anyone was hurt in the shooting.

Matejka, a Canadian, was among more than 500 people who were injured during the Oct. 1 massacre at the Route 91 Harvest festival. The alleged gunman, Stephen Paddock, killed 58 people before turning the gun on himself, police say.

“You are a lying piece of [expletive] and I hope someone truly shoots you in the head,” one Facebook user wrote to Matejka in the days following the shooting.

“Your soul is disgusting and dark! You will Pay for the consequences,” wrote another.

Matejka shut down his social media accounts, but his relatives are still being targeted by people who believe that the deadliest shooting in modern U.S. history was a hoax.

“There are all these families dealing with likely the most horrific thing they’ll ever experience, and they are also met with hate and anger and are being attacked online about being part of some conspiracy,” Taylor Matejka, the survivor’s brother, said. “It’s madness I can’t imagine the thought process of these people. Do they know that we are actual people?”

Matejka posted a photo of his bullet wound on a GoFundMe page that he started to collect funds for medical expenses.

Authorities working the case have drastically clamped down on the information they release about the shooting, prompting people to fill in the void online.

The theory that the entire shooting was a hoax is on the fringes of the discussion and has been dismissed by independent reporters investigating the shooting in Las Vegas.

People who subscribe to the hoax theory call the survivors “crisis actors” saying they were hired to pose as victims. Taylor Matejka tried to respond to a few of the theorists online but says none wanted to hear his reasoning.

“A really sad part of this is that a lot of people think they’re fighting the good fight and exposing truth,” he said.

Matejka traveled to Las Vegas with his girlfriend Amanda Homulos to celebrate his 30th birthday. When the shooting started, Matejka was hit by a bullet in the head and knocked to the ground. The couple got inside the car of another concert attendee who drove them to a hospital.

Matejka’s wound was not serious.

“I’m just so grateful that we’re still here, and I can’t express how sorry I am for the people that didn’t make it,” Homulos told The Associated Press.

On Wednesday, the spokesperson for the investigation, Clark County Sheriff Joe Lombardo, gave the first interview in more than two weeks to a local television station. Prior to that, on Oct. 13, he read prepared remarks at a press conference and did not take questions.

Lombardo did not reveal anything new about the investigation, except for a personal hunch that Paddock’s girlfriend, Marilou Danley, may be withholding information from investigators.

Addressing the conspiracy theories, he said that the notion that the federal authorities and “police are trying to hide stuff or are conspiring together to hide stuff is ridiculous.”

He reserved a special criticism for people who accuse victims and families of faking injuries and deaths.

“I’m amazed at people’s mental state to post the stuff that they post,” Lombardo told KLAS. “I probably shouldn’t tell you this, but I wish I could locate some of these individuals or have them present themselves to me personally and I’ll show them what happened out there.”