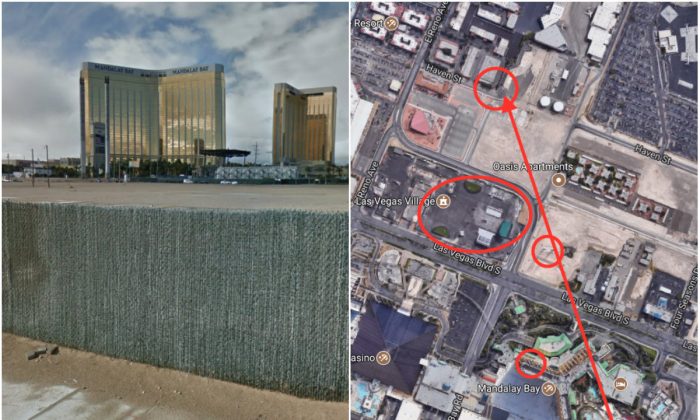 Independent reporter Laura Loomer, who’s been relentlessly digging up information about the Las Vegas shooting, found a clue that looks a misfit to the official account of the shooting.

She examined a mark on the ground in a parking lot near Haven Street where one of the victims of the Oct. 1 shooting died. The mark seems to have been left by a bullet ricocheting off the ground. Loomer examined another mark on a nearby garage door where the bullet, or its fragment, possibly landed next.

When Loomer’s fellow investigator aligned a laser pointer with the skid mark on the ground to determine from which direction the shot came, it pointed in the general direction of the Mandalay Bay hotel, where the police found the shooter, Stephen Paddock.

But it didn’t point at the western edge of the Mandalay Bay hotel, where Paddock rented a room on the 32nd floor, but markedly further to the east.

Soon after the attack that left 58 dead and hundreds injured, speculation emerged that Paddock wasn’t a lone shooter. The police scanner recordings had officers reporting shooters at multiple locations. Multiple witnesses and survivors said they heard the shots coming from more than one location. Some witnesses were adamant about there being more than one shooter.

And there were other indices. Mike Adams, the founder of Natural News, looked at video clips from the scene and checked the sound bites of the gunfire to determine how far the shooter was from the target.

Because bullets travel faster than sound, the distinct sounds of bullets hitting the pavement are heard in the recordings first, before the thumping sounds of the gunfire arrive. By measuring the delay between the two sounds, one could determine how far away the shooter was.

Based on the ammunition Paddock allegedly used, .223 Remington, Adams calculated that the shooter must have been 425-475 yards away, which is roughly the distance between Paddock’s hotel room and the open-air country concert, which was the target.

Some of the gunshots, however, hit the concert area from a distance of about 250-275 yards, Adams found.

Authorities stated .308 caliber ammunition was also found in Paddock’s hotel room. The heavier ammo could have registered in Adams’s calculations as coming from a shorter distance. But Adams said he found the shots from the shorter distance mixed in with the shots from the longer distance. That would suggest that either Paddock, 64, was rapidly shooting two rifles at the same time, or he wasn’t the only one shooting.

If Adams’s conclusion was correct, it would intersect with Loomer’s finding and with other theories circulated online.

One place that is roughly 250 yards from the concert area, and is also where the bullet trajectory Loomer examined pointed toward, is the eastern support column of the Skyvue Las Vegas Super Wheel. The giant Ferris wheel was never completed and its two towering support columns, about 250 feet tall, stand behind and across the street from the concert stage, providing a suitable vantage point for a potential shooter.

In a video posted on Periscope, Loomer and the other researcher show what they believe are the bullet marks and explain their reasoning. “I’m not telling you this is fact. I’m not saying there is a second shooter,” she said. “I’m saying there is a ricochet—very clear ricochet mark—and if you use laser technology to look at the trajectory, it aligns with the tower where some people have said they believe another shooter was shooting.”