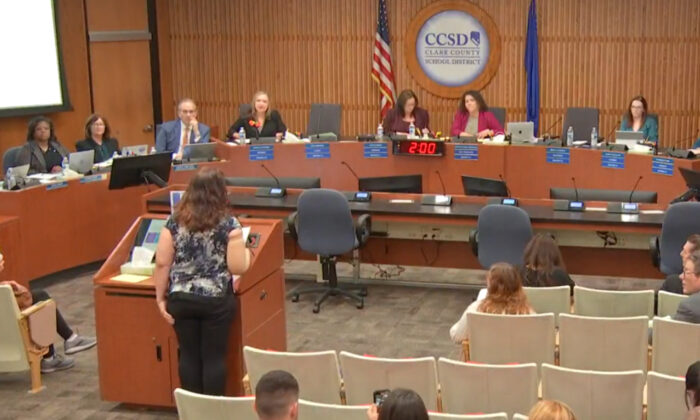 A Nevada school district has come under fire after school board officials repeatedly muted a mother’s microphone as she read from a profanity-dotted assignment given to her 15-year-old daughter to memorize.

The exchange took place on May 12 during the public comment session of a board meeting at Clark County School District (CCSD), the fifth-largest in the nation. It went viral this week on social media after a 100-second clip was shared by popular Twitter account Libs of TikTok.

“This will be horrifying for me to read to you, but that will give you perspective on how she must have felt when her teacher required her to memorize this and to act it out in front of her entire class,” the visibly shaken mother told the board members.

She then read from the assignment sheet, which said: “I don’t love you. It’s not you. It’s just that I don’t like your [expletive] or any [expletive] in that case.”

“Forgive me, we’re not using profanity,” the chairwoman said as the mother’s microphone went silent.

“I ask you simply—This is a public meeting. I ask for decorum,” the chairwoman replied after muting the mother’s microphone once again.

Three hours of footage provided by the CCSD shows that the board ended up giving back the mother time to finish her statement, in which she said that the assignment given to her daughter violated multiple Nevada laws, including one that outlaws using minors in pornographic performances.

“In one of my meetings with the school administration, they blamed my daughter for not saying ‘no’ to the assignment. They blamed my daughter, who is the victim,” she said. “Teachers are in a position of power, educators must understand the laws about sexual abuse, and that is where I’m hoping you’ll help.”

In a statement released in response to the social media backlash, the CCSD insisted the content of the assignment in question was created by a student, rather than a part of the district’s curriculum.

“The Clark County School District is investigating the circumstances surrounding a class assignment consisting of a student-generated writing exercise that produced content not conducive to student instruction,” district officials said, adding that they won’t comment on individual employee or personnel issues.

The Epoch Times reached out to Power2Parent, a Las Vegas-based non-profit parent group advocating in support of the mother, who preferred to not be named in this report. A spokeswoman for the organization confirmed that the passage recited at the meeting was indeed written by a student, but approved by a teacher.

Specifically, according to Power2Parent, the daughter was in a class where the teacher tasked everyone to write a monologue. The teacher then collected and reviewed the monologues before redistributing each one of them to a different student. The daughter received the monologue written by another student and was pressured to read it in front of the class in order to complete the assignment and be graded.

“The mom was devastated when she found out about it,” the spokeswoman said, noting that parents have not been notified about this class activity. “The daughter was humiliated and embarrassed, obviously. She’s 15. She was very uncomfortable reading that out loud.”

“She was too shy to go against what the teacher was asking her to do. She felt like she would have been even more humiliated if she did not recite it,” the spokeswoman added.

Erin Philips, co-founder and president of Power2Parent, told The Epoch Times that the mother had complained to school administrators and the regional superintendent but didn’t receive a satisfactory response. “They weren’t following up with just basic protocol of returning the call of the mom,” she said.

When the mother eventually met the regional superintendent with the help of Power2Parent ahead of the May 12 meeting, she was told that this situation “was bad,” and that “there should be disciplinary action.” Philips said, however, based   on her experience with the CCSD, this likely means that the teacher will face no consequence more serious than a warning letter, let alone the apology the mother wanted.

Philips said the district “obviously got more engaged” after the video went viral on social media. The mother was able to speak to another regional superintendent, who said they were “following up on it” but remained ambiguous on whether there will be an apology from the teacher.

What also happened after the meeting, according to the parental rights group leader, was that the school arranged a one-on-one conversation between the daughter and the teacher, even though the mother had explicitly asked the school officials to not do so without her presence.

“The principal of the school pulled the daughter out of class into the hallway, spoke to her alone, and then put her in the classroom alone with the teacher—who’s essentially already abused this child—in order for the teacher to ‘apologize,'” Philips said, adding that instead of actually apologizing, the teacher told the girl that she should have said “no” to the assignment if she felt uncomfortable.

The mother has since faced a lot of heat from social media, especially after a fact-check article by Newsweek flagged the story as “mostly false” on the basis that the school board did restore the mother’s speaking time, and that the profanity-laced paragraph did come from a student rather than the school.

“While a Clark County School District meeting was briefly paused after a mother of a pupil quoted an alleged reading assignment that used profane language, she was given her full allotted time to speak. A video of the meeting was not censored. The phrases recited at the meeting appear to have been written by students as part of a creative writing task, not a text assigned to Clark County schools,” the article concluded, although the mother didn’t suggest otherwise.

According to Philips, the mother has turned down interview requests to avoid causing more harm to her child.

“She has had opportunities to go on national news. She won’t do it because she’s concerned for the health and well-being of her daughter,” Philips said. “I do think she needs to be able to tell her own story, though.”