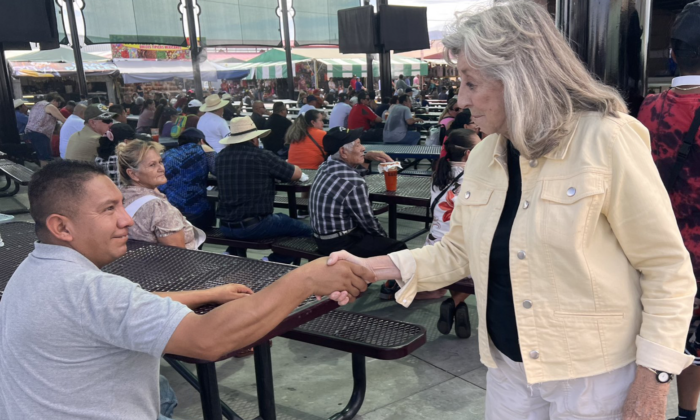 As Floridians and New Yorkers voted in primaries on Aug. 23, House Speaker Rep. Nancy Pelosi (D-Calif.) and House Minority Leader Rep. Kevin McCarthy (R-Calif.) were in Las Vegas to boost their party’s odds of winning the chamber’s majority in the midterm elections.

The House leaders were in town to double down on the bets party voters made in Nevada’s June 14 primaries when Republicans nominated three challengers to take on Democrat incumbents in what analysts uniformly rate as three “tossup” southern Nevada congressional races.

Among the GOP candidates McCarthy was stumping for was Mark Robertson, a retired U.S. Army colonel who is campaigning to unseat six-term Democratic incumbent Rep. Dina Titus (D-Nevada) in Nevada’s Congressional District 1 (CD 1).

The three Republican challengers may benefit from an inadvertent assist from Nevada’s Democratic-controlled legislature’s redistricting.

In an effort to bolster Democratic numbers, lawmakers shifted some CD 1 Democrat-dominant precincts into CD 3 and CD 4, clumping what had been a deep blue inner-Las Vegas district Titus routinely won by double-digits in with rapidly reddening suburbs to elevate Republican chances of winning the district for only the second time in 40 years.

With CD 1’s new boundaries stretching east and south of Las Vegas and its reconfigured demographics doubling the district’s number of registered Republicans to nearly 110,000, what had been a 2-to-1 Democratic voter bulge has been scaled back to single-percentage points.

The National Republican Congressional Committee has added all three districts to its target list of flippable seats in charting the GOP’s path to taking control of the House in fall’s mid-terms.

The House Republican-aligned Congressional Leadership Fund PAC is spending millions in the state, but at least in CD 1, Titus had accumulated a significant fundraising advantage over Robertson.

Being out-raised at that point by $1 million—updated FEC reports aren’t required until Oct. 1—wasn’t a daunting prospect for Robertson, who emerged from an eight-candidate field to win the CD 1 GOP primary despite not having the campaign coffers several rivals accrued.

Robertson, 62, of Henderson, is a 30-year US Army/US Army Reserve veteran, certified financial planner, and UNLV adjunct professor in finance.

He supports 12-year term limits for Congressional reps, elimination of the U.S. Department of Education, a foreign policy that “puts America first,” and efforts to “strengthen current measures to control our borders.”

If elected, he would propose a balanced budget amendment. “We’re closing in on $31 trillion in national debt. That’s $92,000 of debt for every man, woman, and child in America,” Robertson said in an Aug. 31 Twitter post.

On his campaign platform, he vows to “fight to protect all individual freedoms granted in the Bill of Rights, including Freedom of Religion, Freedom of Speech, Freedom of the Press, Freedom to bear Arms, etc.”

“Modern technology has created monopolies with unchecked power over the accumulation, dissemination and content of virtually all human information,” Robertson states, noting his goal will be to “ensure that this unprecedented power does not infringe on privacy and competition or unduly influence elections and freedom of speech.”

Robertson espouses policies “designed to encourage strong, stable family units without dictating personal choices and practices” and backs law enforcement by opposing “disastrous liberal policies that release criminals back on to our streets.”

As a first-time candidate challenging a well-established incumbent, Robertson said he will demand solutions that solve problems for constituents rather than sustain them as job security for “career politicians” such as Titus.

“Career politicians gave us record inflation and $5 gas. They’ve driven a wedge in Washington to further divide our country. I’ve never run for public office. I’m running to give YOU a voice in DC and solve the problems which career politicians have created!” he said in a Twitter post.

Citing President Joe Biden’s college loan executive order, Robertson said: “When I was 17, I had to get my parents’ permission to join the Army. That helped me pay my way through college. Today, we’re paying for elite students to receive their education by taxing the working class. This is unfair and morally wrong. It will cost each taxpayer over $2,000!”

Elected to the CD 1 in 2012, Titus, 72, previously represented CD 3 for one term after spending two decades in the state Senate. She is a retired professor of political science at UNLV.

Titus’s campaign touts her ascension to chair of the House Economic Development, Emergency Management, and Public Buildings Subcommittee as a key asset in helping Nevada “fight for infrastructure projects that will benefit the most vulnerable.”

Citing the Oct. 1, 2017, Route 91 Harvest Festival mass shooting that killed 60 people on the Las Vegas Strip, Titus maintains that she consistently has advocated for “substantive action to reduce gun violence” and will continue to do so.

Titus is the sponsor of the proposed “Closing the Bump Stock Loophole Act,” which would encode in federal statute former President Donald Trump’s executive order banning sales of the devices.

The measure, which requires the federal government to regulate bump stocks like automatic weapons such as machine guns, passed the House in a bipartisan June vote but is unlikely to be addressed in the Senate until 2023, if at all.

In her first televised ad, released Aug. 30 across Las Vegas-area airways, Titus emphasizes her “established reputation as a fighter for Southern Nevada” and “speaks to the battles I’ve won in Congress” in delivering benefits for “working families … even in the face of opposition from massive corporate interests.”

A DREAM Act advocate who supports “comprehensive immigration reform,” Titus is seizing on the U.S. Supreme Court’s repeal of Roe v Wade that kicked abortion regulation back to the states, as a top campaign issue.

Titus is a cosponsor of the Women’s Health Protection Act, which would encode in federal statute “a women’s constitutional right to reproductive health care” and “protect abortion access nationwide.” Adopted by the House in late 2021, it has not been heard in the Senate.

“If SCOTUS won’t act to protect women’s health, Congress needs to,” she said in April, two months before the Supreme Court’s Roe repeal.

Titus and her two fellow southern Nevada congressional incumbents are among Democrat candidates in close races across the country hoping to benefit from a post-Roe bounce at the polls.