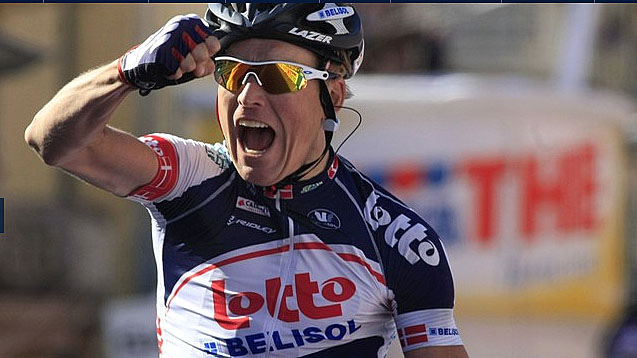 Lars Bak of Lotto-Belisol won Stage 12 of the Giro d’Italia by attacking a seven-rider breakaway in the final two kilometers, while behind him FDJ’s Sandy Casar and BMC’s Ivan Santaromita fought to take the leader’s pink jersey.

In the end Katusha’s Joaquim Rodriguez held onto the race lead by 17 seconds over Ryder Hesjedal. Casar moved into third in the General Classification, 26 seconds down.

“It was a tough race—I was lucky to get away in a strong group at the start of the race,” Bak said on the Lott website. “From the car, [directeur sportif] Marc Wauters guided me very good in the final part of the race. I knew it was going to be a hard sprint and, not being a sprinter, I took my chance.”

“Obviously this is my biggest win ever. My last victory was seven years ago, but this is something else. This is a big tour. It’s going great with Lotto Belisol. We were here to get away in the escapes and I think Lotto Belisol has been seen every day in the Giro. There will probably be two more chances to get away in the upcoming stages, before going into the mountains. We will try our luck, because we have nothing to lose.”

The break, originally seven, then nine riders, got away 45 kilometers into the 155-km route, attacking on the first of four categorized climbs.

Casar was 4:01 down in the General Classification, Santaromita 4:16, so both had a chance to take the maglia rosa if the break survived. The peloton seemed unconcerned by the break, despite the presence of Casar and Santaromita; neither was considered a serious GC contender in the long run.

Katusha seemed completely uninterested in defending the pink jersey, and for most of the stage, no other team took up the chase. Long stages, lots of hills and high speeds for sprint finishes have worn out riders who want to save their legs for the mountain stages. Teams with riders seriously harboring GC ambitions probably didn’t see any value in burning up their legs on stages which would not be decisive.

Finally Liquigas took up the chase, cutting the seven-minute gap down to three minutes at the end. Possibly Liquigas wanted Katusha to keep the jersey and the pressure to defend it.

The break rode together until the Cat 2 climb of Valico La Mola, when Omega Pharma-Quickstep’s Michael Golas attacked. The Polish rider had captured all the King of the Mountain points, so no one marked him when he sprinted ahead at the top of the third climb. This time he kept going, taking a lot of chances on the descent to open a gap of 20 seconds on the break.

Golas had three near-crashes on the very technical descent; the last saw him skidding to a stop in a driveway as he ran out of road. RadioShack’s Jan Bakelants did crash on the descent, but was able to recatch the breakaway.

The breakaway riders caught up to Golas on the final climb of the day, the Cat 3 Villa Tassani: 5 km long with an average grade of  six percent and an eleven-percent section near the peak, this was a great springboard for attacks.

Sandy Casar attacked repeatedly on the climb, as did Lars Bak and Ivan Santaromita, but no one got away. Casar made a strong effort 100 meters from the peak and took the KOM points and the lead, but he couldn’t stay away on the downhill, which was even tighter and more twisty than the Valico La Mola descent.

Back in the peloton PaoloTiralongo of Astana tried an attack, covered immediately by Lampre’s Damiano Cunego and joined soon by Rabobank’s Thomas Slagter. The peloton picked up the pacer to catch this trio, which cut into the gap to the leaders.

Micahel Gola and Martijn Keizer couldn’t hang on to the break through the final six kilometers; the other seven sparred constantly until the line. Jackson Rodriguez opened a gap, and got caught. Santaromita had a go, and Casar covered. Jan Bakelants then took a turn; again Casar covered it.

With 1.7 km left in the stage, Sandy Casar and Ivan Santaromita were focused on each other; Lars Bak took advantage and sprinted away. Casar let him go; he wanted the pink jersey, not the stage win. Bak time-trialed to the line, winning by eleven seconds. Casar won the sprint for second, picking up 12 bonus seconds, while Andrey Amador took third. Santaromita finished fifth, out of the bonus.