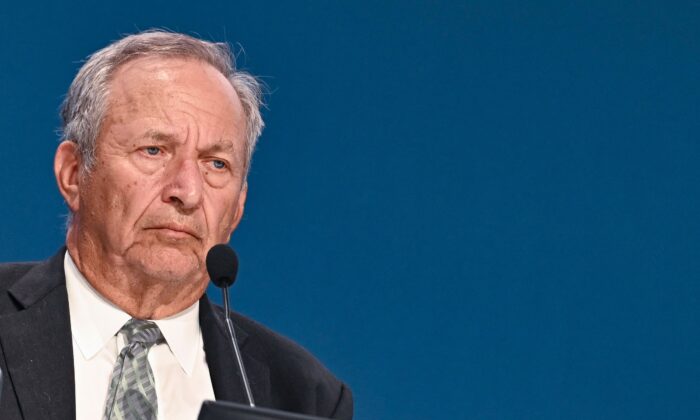 Lawrence Summers during the press conference of the G20 High Level Independent Panel (HLIP) during the G20 finance ministers and central bankers meeting in Venice on July 9, 2021. (Andreas Solaro/AFP via Getty Images)
Viewpoints

When we hear President Joe Biden name-dropping that “I was talking to Larry Summers this morning and there’s nothing inevitable about a recession,” it might as well be Napoleon announcing to the assembled La Grande Armée that he was talking this morning to Armand de Caulaincourt, the famously close adviser who warned of the folly of invading Russia, and that “there’s nothing inevitable about a half million of you freezing or starving to death over the next month and a half.”

Biden is as stubborn in continuing the disastrous policies that are catapulting the country to devastating stagflation as “le petit caporal” was in believing in 1812 that his ill-prepared forces could subdue the Russian bear in its native stomping ground.

The president was giving at least two false impressions: that Summers, the progressive economist who was President Barack Obama’s National Economic Council director and President Bill Clinton’s Treasury secretary, is with Biden on economic policy, and that the blame for the impending recession lies somewhere other than at Biden’s feet—or the feet of those who actually run things in this administration; this 79 1/2-year-old president needs crib notes for even the simplest interactions with outside personages.

While he may have been on the phone with Summers one fine day, Summers hasn’t ever had this president’s ear. After all, in February, in an interview with the Harvard Gazette, Summers couldn’t have been clearer in blaming Biden and the Democrats’ big-spending ways:

“I’m not sure that we would have the inflation if there had never been a pandemic and, even if there had been a pandemic, without the overwhelming stimulus that was applied well into recovery—during 2021,” he said. “We had an economy where income was running short by $50 billion a month because of the pandemic, and we injected $150 billion to $200 billion a month into that economy. It’s perhaps not surprising that that’s led to an overflow of demand, which has generated inflation that on the CPI measure has risen to 7 percent.

“Bringing about a gentle tap on the brakes that slows the economy enough to substantially reduce inflation without inducing a real economic downturn and without causing significant financial instability is a quite formidable challenge.” Again, recession sounds pretty inevitable. Whatever Summers told Biden on the phone, it’s doubtful it was, “Keep up the good work, Mr. President.”

Not to say that Summers always makes sense. In the same interview, he conjectured that “if inflation had better been controlled, there’s a real possibility that the election of Richard Nixon in 1968 and Ronald Reagan in 1980 would not have happened”—which is kind of like saying that if pigs had wings, they could fly; where are these liberal Democrats who get into the White House and then don’t want to spend billions or trillions on a Great Society or Green New Deal?

Even Bill Clinton sought a big-spending fiscal stimulus “jobs bill,” which never became law because of Senate Republicans’ filibustering. The jobs bill lost in Congress, but it didn’t stop him from taking credit for the tech job boom such inflationary legislation would have dampened, a boom that was surely an extension of the Reagan expansion.

Summers isn’t the only left-leaning economist to recognize that Biden’s big government spending is behind inflation. Harvard’s Jason Furman, who, like Summers, is an Obama veteran, said in February: “To think $2.5 trillion in fiscal stimulus—amounting to 11 percent of GDP—would not cause inflation required believing either that such a huge adjustment was possible within a matter of months or that fiscal policy is ineffective and does not increase aggregate demand. Both views are implausible.”

Another Obama adviser, Steven Rattner, alluding to Biden’s $2 trillion American Rescue Plan, told NBC News at the beginning of this month, “We’re all paying the price for having overstimulated this economy during the pandemic and putting too much money into people’s pockets, which created a lot of this inflation.”

No word on whether Furman or Rattner has been on the phone with Biden, but what would it matter when the man on the other end of the line isn’t in charge?