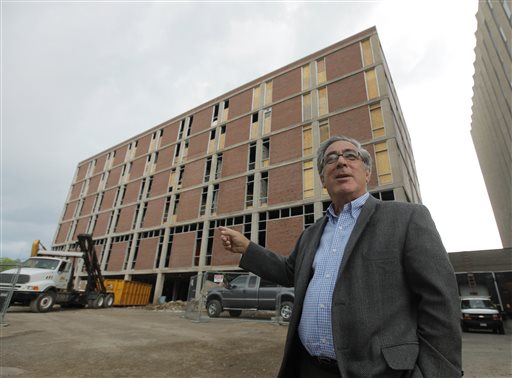 In this June 24, 2010 photo, developer Larry Glazer gestures toward a building to be demolished on Alexander Street in Rochester, N.Y. Glazer and wife, Jane, were aboard their small plane, which took off from the Greater Rochester International Airport, as it flew 1,700 miles down the East Coast on Friday, Sept. 5, 2014, before finally crashing off the coast of Jamaica. (AP Photo/Democrat & Chronicle, Carlos Ortiz)
US

Larry Glazer and his wife Jane Glazer are dead, after the plane they were on crashed near Jamaica.

Glazer was previously linked to the plane but it had been unconfirmed whether he was on board or not.

The family confirmed to Rachel Barnhart of News8 in Rochester, New York that Larry and Jane died in the crash.

“They were pillars of the community. Such a giant loss for #ROC,” she added.

“The Glazer family has done so much for the Greater Rochester community. Please keep them in your thoughts during this tragic time,” added Senator Ted O’Brien.

“The Glazers were innovative and generous people who were committed to revitalizing downtown Rochester and making the city they loved a better place for all,” said New York Gov. Andrew Cuomo. “I offer my deepest condolences to the Glazers’ family and friends during this difficult and trying time.”

The plane was purchased by Glazer earlier this year.

Glazer is a pilot with over 5,000 hours of experience, reported AIN News.

In this Sept. 18, 2012 photo, Jane Glazer, owner of QCI Direct of Chili, heads back to her seat after winning a Rochester Business Ethics Award at the Riverside Convention Center in Rochester, N.Y. Glazer and husband, Larry, were aboard their small plane, which took off from the Greater Rochester International Airport, as it flew 1,700 miles down the East Coast on Friday, Sept. 5, 2014, before finally crashing off the coast of Jamaica. (AP Photo/Democrat & Chronicle, Tina Yee)

The single-engine Socata TBM 700 was registered to a company called NEW 51LG LLC, housed at the address of Buckingham Properties’ headquarters in Rochester, New York, reported the Democrat & Chronicle.

Glazer co-founded the company back in 1970. His bio on the company website includes a description of his family life and flying experience.

Larry spends some of his spare time on the ground – gardening around his house with his wife, Jane; and some in the sky – flying his plane. Larry serves as President of the TBM Owners and Pilots Association,” it said.

Sources close to the Glazers said the couple had planned a weekend trip to Naples, where the original flight plan was to. Jamaican officials said that the plane ultimately crashed in the ocean north of the island.

Maj. Basil Jarrett of the Jamaican Defense Force says the plane went down Friday about 14 miles northeast of Port Antonio. Jarrett says the military has sent aircraft to investigate. The Glazers were reported to have died from hypoxia before the plane crashed.

A U.S. C-130 aircraft is also flying over the crash site and a U.S. Coast Guard cutter is on the way, according to Guard Petty Officer Jon-Paul Rios. “None of us have found anything at this time,” Rios said.

The incident is the second time in less than a week that private pilot has become unresponsive during a flight. On Saturday, a pilot lost consciousness and his plane drifted into restricted airspace over the nation’s capital. Fighter jets were also launched in that case and stayed with the small aircraft until it ran out of fuel and crashed Saturday into the Atlantic.

Cases of pilots becoming unresponsive while their planes wander the sky are unusual, with probably not much more than a handful of such incidents over the last decade, said aviation safety expert John Goglia. Sometimes the incidents are due to a pilot becoming incapacitated by a heart attack or stroke, but more often the problem is insufficient cabin pressurization that causes the pilot and any passengers to pass out, he said.

Pilots are supposed to check that the cabin pressurization is correctly set before takeoff, but there have been cases where they have forgotten to do that or the pressurization level has been improperly set, said Goglia, a former National Transportation Safety Board member. If cabin pressure drops too low, there won’t be enough oxygen per cubic foot in the cabin and any people aboard will lose consciousness, he said. In such cases, it’s likely that those on board will die from loss of oxygen before the plane runs out of fuel and crashes, he said.

Mechanical problems or a window or fuselage leak can also lead to rapid cabin depressurization. When that happens, the time of useful consciousness a pilot has in which to react is measured in seconds, Goglia said.

In 1999, the pilots of a Learjet carrying professional golfer Payne Stewart from Orlando, Florida, to Texas became unresponsive. The plane took a turn and wander all the way to South Dakota before running out of fuel and crashing into a field west if Aberdeen. Stewart and five others on board were killed. An NTSB investigation blamed the accident on depressurization.

Hypoxia Symptoms, Definition, Treatment, Cause: What is it? Oxygen-Deprivation