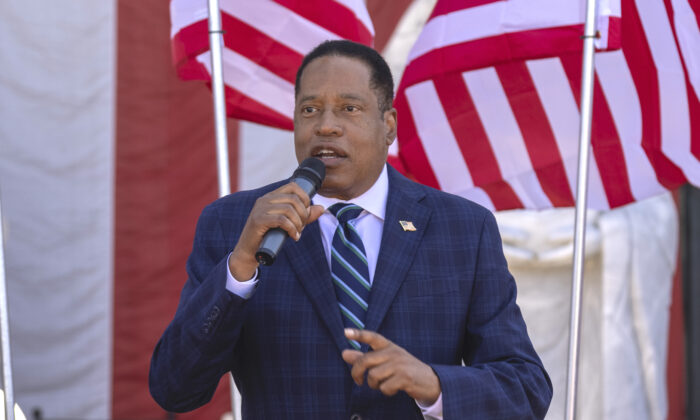 At a press conference at an SC Fuels gas station in South El Monte, Elder, who is an Epoch Times contributor and EpochTV host, said Newsom, Biden, and Harris are afraid of him.

“They are deathly afraid of Larry Elder from the inner city, who went to public school, who’s going to break the stranglehold that Democrats have had over blacks and browns for decades,” he said.

“He is a key partner in fighting the pandemic and delivering economic relief to working families and helping us build our economy back better than ever,” Biden said in recent remarks.

The Republican candidate was enthusiastically endorsed by Romero, a Democrat, who said during the event that Californians are struggling with the high cost of living.

“We have the highest taxes in the nation, we are paying more for gasoline, and with these taxes, we were promised excellent roads. That was a lie. Basically, what we are finding now is that gas prices are almost five dollars a gallon and the governor, when he had a chance to put a pause on an automatic increase last July, looked at the other way and passed that cost of living onto the people of the state of California,” she said.

At the conference, Felix said he is moving his business, which he founded in South El Monte in 1952, out of state because he, like many other Californians, are leaving for less taxed, more affordable areas.

“The situation in South El Monte is that not only is it difficult for businesses to maintain a viable enterprise here, but it’s also impossible for people that are from this community to continue to live here. I have a facility … in the City of Industry that employs 120 people. I’m in the process of closing that facility right now and moving it to Decatur, Texas. So that’s 120 jobs,” Felix said.

Harrington, who is in his eleventh year on the San Gabriel City Council, encouraged Californians to recall Newsom, because he believes issues such as homelessness, crime rate, quality of education, and the drought are worsening.

Harrington said that the recall is not about political parties, but about who can better solve the issues in California and represent the values of Californians.

“The recall is about two things, it’s about value and our values. The value is whether we as Californians are receiving a return for the tax dollars that we put into the system. Values are whether the elected officials stand up and support the values of the people. Newsom has failed in both of these aspects.”

“I’ve been campaigning now for six weeks … For six weeks, I’ve been listening to the complaints of business people all over California, and they are too numerous to mention,” he said.

“When I get to Sacramento, small business people are going to have a friend, and we’re going to turn around this anti-business attitude that has caused people to leave California.”

Elder also condemned Newsom’s handling of the pandemic, especially for shutting down schools without considering the vulnerability of minority groups.

“He shut down the state in the most severe way, [more] than the other forty-nine states … his own kids were enjoying in-person private education, denying in-person schooling for the kids in our government schools, 80 percent of whom are black or brown,” said Elder.

Elder stated that he believes in “choice in education,” and mentioned there will be a ballot initiative for the November 2022 election to set up ESAs (Education Savings Accounts) for students. In the plan, about $15,000 per student will be distributed to parent-controlled accounts every year. The ESAs would allow the parents to withdraw their children from public school and attend a private school, charter school, or cover the cost of home schooling.

“The hopes and dreams of countless Californians were destroyed when this man ignored science and shut down the state, while exempting his own winery from the very mandates that he was imposing on everybody else,” Elder added.