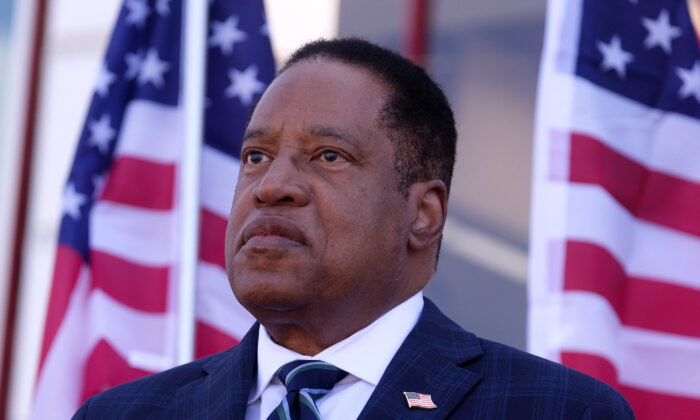 Republican gubernatorial candidate Larry Elder on Wednesday vowed to “save California” shortly after he was forced to prematurely end a walk-through of his planned campaign stop at Venice Beach, when over 10 hecklers harassed him, throwing projectiles.

Elder, who is vying to replace California Gov. Gavin Newsom if he is recalled this month, was touring Venice Beach’s homeless encampments with campaign team members when he was harassed.

Footage of the incident uploaded to social media shows two hecklers repeatedly shouting racial slurs at Elder. A lady in a pink gorilla mask, riding a bike, appeared on video throwing an egg that appeared to narrowly miss Elder’s head.

One of Elder’s security staff attempted to separate the woman from the crowd, to keep her from continuing to throw projectiles.

A white SUV drove up to the crowd, which was walking down Hampton Drive towards Sunset Avenue.

Elder’s team escorted him to his vehicle and drove away.

“Today I kicked off the Recall Express bus tour. Before we even left Los Angeles, my security detail was physically assaulted, shot with a pellet gun, and hit with projectiles. The intolerant left will not stop us. We will recall Gavin Newsom. We will save California,” Elder said in a statement on Twitter late Wednesday, responding to the attacks.

Elder, 69, is an Epoch Times contributor and host of “Larry Elder with Epoch Times” on EpochTV.

The conservative talk radio host first announced in July that he will run in California’s recall election of Democratic Gov. Newsom, which has been set for Sept. 14.

He said in a statement on his campaign website that he’s running for governor “because the decline of California isn’t the fault of its people,” adding: “Our government is what’s ruining the Golden State.”

On his website, Elder calls for “returning to the bedrock Constitutional principles of limited government and maximum personal responsibility.”

The recall election of Newsom, a first-term Democrat, follows mounting criticism from within his party and across the aisle over his handling of the COVID-19 pandemic and other issues.

He faced intense backlash after he was seen dining at the French Laundry restaurant with lobbyists after telling Californians to stay home. Newsom apologized for his actions.

The last time a governor was recalled in the state was Gray Davis in 2003. Residents voted “Yes” on recalling Davis by 55.4 percent and selected one of 135 candidates on the ballot to replace him.

According to the National Conference of State Legislatures, California is one of 19 states where recalls are permitted.

Last month, President Joe Biden publicly backed Newsom, saying in a statement that he the Democratic governor “is leading California through unprecedented crises—he’s a key partner in fighting the pandemic and helping build our economy back better.”

“To keep him on the job, registered voters should vote no on the recall election by 9/14 and keep California moving forward,” Biden added.

The California Republican Party has declined to endorse a candidate, however, several recent polls show that Elder is in the lead.