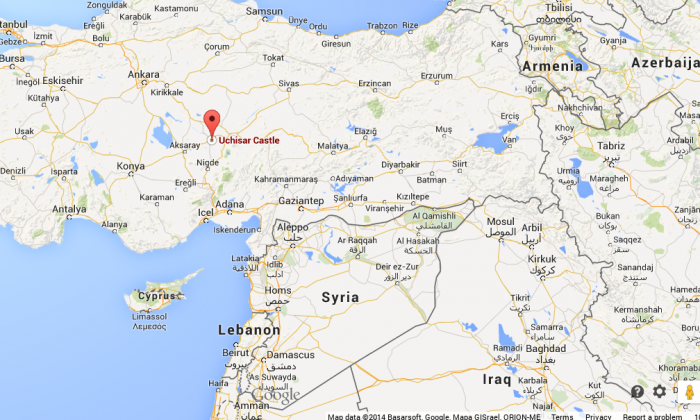 A large underground city, possible the largest in the world, was discovered near the Uchisar Castle, also known as the Neveshir fortress, in Turkey. (Google Maps)
Science

A large underground city thought to originate around 5,000 years ago has been discovered in Turkey.

The city was found by crews working on an urban transformation project in the country’s Nevsehir province, home to a number of many underground cities.

The city, located around the Nevsehir fortress, features tunnels as long as 4.3 miles (7 kilometers).

Hasan Unver, the mayor of Nevsehir, said that the other underground cities in the province don’t even add up to the kitchen of the new underground city.

He told the Daily Sabah that the city is the largest in the world.

He said that the parts of the city that have been discovered so far span about 248.5 square miles (400,000 square meters).

Ergun Turan, the head of the country’s Housing Development Administration, added to the Hurriyet Daily News that the administration was tearing down buildings around the fortress when they made the discovery. Turan said the project cost 90 million Turkish Liras but that it will be moved and the underground city will be preserved and studied.

Unver said the government plans to open the city to visitors, and are in the process of building walking platforms inside as well as a large park on the surface.

Nevsehir province is in the middle of the country, at the volcanic region between the mountains Erciyes and Hasan.

It’s known for it’s numerous underground cities, which includes one that has a depth of approximately 0.4 miles (60 meters), equal to an eight-floor building, with the capacity to house nearly 20,000 people.

That city, the Derinkuyu underground city, was discovered decades ago and opened to visitors in 1969.

The new city, which has yet to be named, is believed to have originated during the time of the Hittites, an Anatolian people who established an empire in 1600 BC across what is today Turkey, Syria, and Lebanon.