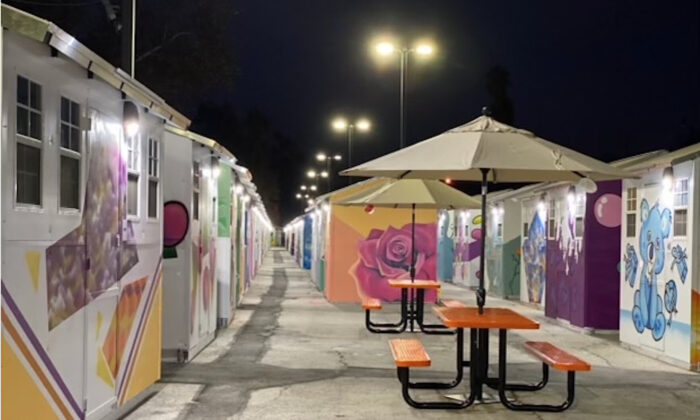 The largest tiny home community in the United States recently opened in Los Angeles, with more than 220 beds being available. The 64-square-foot homes—also known as “pallets”—are billed as a cost-effective alternative to larger, more expensive permanent supportive housing units.

A handful of tiny home villages have sprung up across Los Angeles County recently, accommodating up to 1,000 homeless people. However, many of the projects funded by Measure HHH, a $1.2 billion bond approved in 2016 meant to expand interim housing for the homeless, have remained stuck in development pipelines.

“It’s been a marathon to do this and to achieve a situation where the government is … addressing the crisis effectively,” Hope of the Valley President Rowan Vansleve told The Epoch Times.

Hope of the Valley, the nonprofit that oversees the tiny home villages, partnered with city officials to construct the compounds. Each pallet in the new location costs roughly $23,000 per person, which amounts to about $55 per day. Vansleve said this is nearly half the cost of the first tiny home village at the Chandler Boulevard location, which cost $40,000 per bed.

“When you factor it all in, it’s incredibly cheap, because that’s providing three hot meals; it’s providing five 24-hour security guards; it’s the clothes, the shampoo, all the toiletries to sundry products; as well as case management services,” Vansleve said.

For all 224 beds, the overall cost of construction amounts to $5 million. Each tiny home contains two beds, lights, a power outlet, a laundry basket, a smoke detector, an emergency exit, and heat and air conditioning.

For personal items that don’t fit inside the unit, residents are provided with extra storage: their own 60-gallon bins, locked away behind a chained fence on the premises. Each unit also has murals painted on the outside, made by YouTube artist Zach Hsieh.

Initially, the cost to break ground to create tiny home villages surged due to the cost of installing sewage and power lines. However, Vansleve said, “Through those learnings, we’ve worked out we can actually put them in parking lots, on the existing asphalt.”

Using different materials for the pallets and bringing in a private corporation to paint them has also brought costs down. Vansleve said the effort was a public and private partnership between the City of Los Angeles and donors.

The Highland Park village, just off of the 110 freeway on Arroyo Drive, is part of Councilmember Kevin de León’s district, which also includes Skid Row. De León has the most homeless people in his district, and he hopes the tiny homes will help some of the 41,000 homeless people transition from the streets of Los Angeles.

“This is a part of Councilman de León’s commitment to do his part in developing 25,000 new homeless housing units by 2025,” the 14th District Office wrote in a statement issued on Oct. 19.

To celebrate the new 6.8-acre location in Arroyo Seco Park, de León slept in one of the pallets to experience what it was like. He has previously called the Los Angeles homeless situation “a humanitarian crisis of biblical proportions unlike anything we’ve ever seen before or experienced.”

“The Arroyo Seco Tiny Home Village is all about restoring hope to people whose lives have been shattered into 1 million pieces by homelessness,” de León said on Oct. 20. “This is a crisis of despair and hopelessness affecting us all. But that’s changing and today marks another step toward reversing the pain and suffering to those on our streets who are experiencing it.”

While De León plans to spearhead another Tiny Home village in the neighborhood of Eagle Rock, not everyone is keen on the idea. Resident Pauline Adkins, who has filed a recall petition against de León, previously told The Epoch Times that she hoped “to get an emergency injunction to stop it, at least until we can get more data.”

“We can’t prohibit them from using drugs. … Since it’s directly across the street from a very popular park, how are you going to keep the residents of this tiny home from selling drugs to our children or to our young adults?” she asked.

Other residents pushed back against a village created in Reseda, in Los Angeles Councilman Bob Blumenfield’s district, saying that it’s a good idea in a bad location.

No drugs, alcohol, or weapons are allowed on the premises, but residents have lockers outside the facility where they can store their belongings. They aren’t required to be sober to enter the facility, although each person is assigned a case manager to assess their needs. Hope of the Valley hopes to rehabilitate and transition people into permanent housing after 90 days, but it may take longer for those with more serious addictions.

“The only way to end this crisis is with more long-term and quality housing options—and as the largest tiny homes village in the country, the Arroyo Seco Village is the latest milestone in our commitment to deliver healing and hope to our most vulnerable neighbors,” Los Angeles Mayor Eric Garcetti said during the ribbon-cutting ceremony on Oct. 21.

The City of Los Angeles has been under pressure to create more housing units for the homeless in recent years. According to a 2020 report by Los Angeles Controller Ron Galperin examining the progress of Measure HHH, researchers “found that development costs for supportive housing were high and estimated project timelines were not aligned with the growing magnitude of the homeless crisis.”

“Instead, the City should find other ways to use any remaining funds to deliver faster and less expensive projects, while also reviewing the most expensive projects in pre-development to see what can be done to reduce costs,” the report reads.

But those low-development projects, such as the Tiny Home villages, still have millions of dollars on the price tag. Hope of the Valley Chief Executive Ken Craft previously told The Epoch Times that “once you start addressing the real issue and you start bringing in mental health services, substance abuse counseling, and detox and ongoing services, job training, job placement, case managers, housing, navigators, subsidies to really help people get into housing, and then throw on just the operational costs, with food services, and delivery of those food services, utility costs—it costs money.”

“I wish it didn’t, and I wish that all of our staff could just donate their time,” Craft said. “But when you add it all up, nobody is getting rich. Honestly, [with] these particular projects, we actually lose money on them.”

Residents will move into the Arroyo Drive Tiny Home village, which was built in under 90 days, on Nov. 2. It will be the sixth Tiny Home village operated by Hope of the Valley in the county.