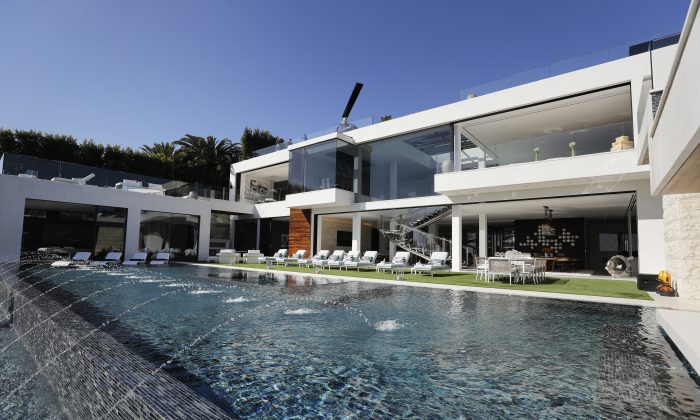 An 85-foot infinity swimming pool at "The One" mansion in the Bel-Air area of Los Angeles. (Jae C. Hong/AP Photo)
Southern California

BEL AIR, Calif.—Richard Saghian, owner of Fashion Nova, was the winning bidder who spent $141 million to buy “The One” mega-mansion, The Los Angeles Times reported Sunday.

Saghian, whose company has benefited from its association with celebrities and influencers such as rapper Cardi B, model Kylie Jenner and pop superstar Lil Nas X, beat out four other bidders Thursday for the 105,000-square-foot house on a Bel-Air hilltop. It’s the largest home in Los Angeles.

“The One Bel-Air is a once-in-a-lifetime property that can never be duplicated. There is nothing else like it. As a lifelong Angeleno and avid collector of real estate, I recognized this as a rare opportunity that also lets me own a unique property that is destined to be a part of Los Angeles history,” Saghian told The Los Angeles Times Sunday in an emailed statement.

Saghian, 40, founded Fashion Nova in 2006 in the industrial suburb of Vernon and continues to serve as its chief executive. His business has found big success by selling inexpensive trendy apparel on its website, supported by marquee names from the hip hop world and a legion of Instagram influencers. The privately held company is owned outright by Saghian and its annual sales now top $1 billion, according to a source close to the company.

He owns two other homes in Southern California, including a Malibu beach house that he purchased from Netflix CEO Ted Sarandos last year for $14.7 million. He also owns a home in the so-called Bird Streets of the Hollywood Hills that he bought for $17.5 million in 2018. It was at that property where armed robbers in June followed Saghian*s Rolls-Royce home and demanded jewelry and other valuables from his friends. Saghian, who had already gone inside, was not injured. All the suspects were caught and one was killed by an armed guard.

“The One” cost Saghian far more than his other homes, but his winning bid was less than half the property’s $295-million list price.

“It’s an incredible deal,” said Branden Williams, who listed the home with his partner, Rayni Williams, and Aaron Kirman of Compass. “No one understands until they get up there. A house like this will never be built again. Whenever it sells again, it will be for even more.”