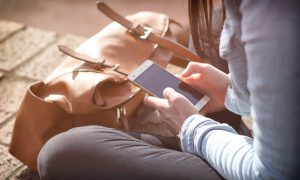 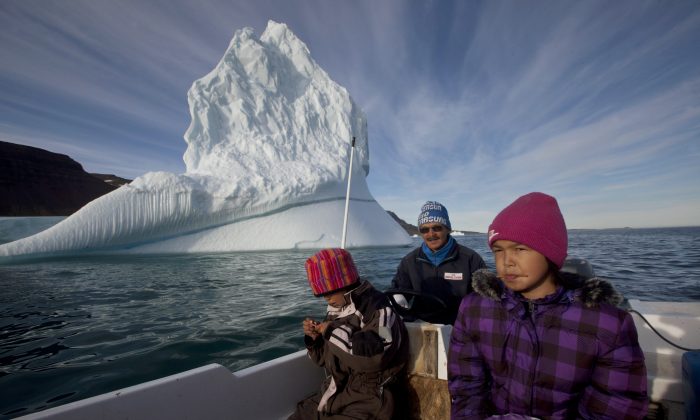 In this July 21, 2011 photo, Inuit hunter Nukappi Brandt steers his small boat as he and his daughter Aaneeraq, 9, scan the water for seals, accompanied by his other daughter Luusi, 8, outside Qeqertarsuaq, Disko Island, Greenland. The country, impacted by global warming causing ice sheets to melt, is the largest island in the world. (AP Photo/Brennan Linsley)
Good to Know

Largest Islands in the World

Greenland is considered the world’s largest island because Australia is classified as a continent.  Greenland is still governed by Denmark, though with increasingly less oversight and possible complete independence in the future. The northern landmass is cold most of the year and activities such as dog-sled racing and hunting are common. Tourists are drawn to the island to hike, fish, and visit hot springs, as well as experience the native Inuit culture. As of July 2013, the population was 57,714—with 89 percent of the people being Inuit, or natives, and Danes making up much of the rest. The country is slightly more than three times the size of the U.S. state of Texas.

This island, above Australia and to the east of Singapore, is believed to have been at one point in time connected to Australia. Currently, the country is split in half—the western half is part of Indonesia and the eastern half is an independent country, Papua New Guinea. The land’s wildlife is astounding—it contains between 5 and 10 percent of the total species on the planet, and more than 1,000 new species were discovered in just a decade, from 1998 through 2008. Those in the United States can glimpse this beauty in the current “Birds of Paradise” exhibit at the National Geographic Museum in Washington D.C., and travelers to the country can see it up close. On the other hand, the rainforests in the country—which house these species—are consistently being cleared for palm oil plantations and other uses.

Situated southeast of the Malay Peninsula, Borneo also has a great deal of biodiversity, and is the one place remaining in Southeast Asia where topical rainforests can still be conserved on a large scale, according to the World Wildlife Foundation—meaning, similar to New Guinea, the rainforests are threatened by development. Species abound here, too, with more than 400 species discovered between 1994 and 2007, and 124 more discovered since 2007, including a frog with no lungs, and a flame-colored snake. Multiple endangered species such as the clouded leopard, which recently went extinct in Taiwan, make Borneo their home. Borneo is split between Malaysia (upper part) and Indonesia.

The African country situated to the east of Mozambique is separated from mainland Africa by the Mozambique Channel. Madagascar is the world’s fourth largest island, and includes several islands off its coasts. Like the second and third largest islands in the world, Madagascar is home to a range of species found nowhere else on Earth or found few other places. The country’s 70-plus species of lemur, for example, are all endangered, according to National Geographic. French and Malagasy are the primary languages, as Madagascar used to be under French rule before becoming independent in 1960. To put its size in context, it is slightly less than twice the size of the U.S. state of Arizona. More than 22.5 million people live in Madagascar. It has had many periods of instability, similar to many African countries.

Baffin is part of Canada’s Nunavut territory, and is between most of the country and Greenland. The capital of Nunavut, Iqaluit, is on the island, and has a population of over 6,000; other cities on the island have relatively low populations, below 1,500 each. Europeans discovered the island in 1576 and used it as a whaling base for several centuries. The wildlife is much different here than the tropical islands listed above, although it has more than Greenland, which is further north. Caribou, polar bears, arctic foxes, arctic hares, and lemmings are some of the animals that make their home on the island, and walrus, narwhal, and seals winter here. A range of birds uses the island to nest during the summer, protected by a bird sanctuary. Visitors to the island enjoy kayaking between ice flows and seeing the Northern Lights phenomenon.