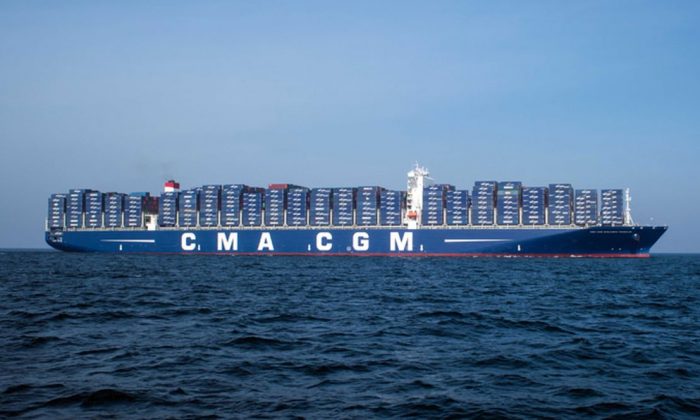 The largest container ship ever to dock at a North American port arrived in the Port of Los Angeles on Monday, according to KABC-7.

The CMA CGM Benjamin Franklin is massive at more than 1,300 feet in length. If it were stood upright, the ship would be taller than the Empire State Building. It also rises out of water that is nearly the size of a football field. Its width matches an Olympic-sized swimming pool.

The French ship can also transport more than 18,000 containers, which is much more than most vessels at the port.

“This ship is called the Benjamin Franklin because it embodies the relationship that has existed between our nation and France,” LosAngeles Mayor Eric Garcetti said. “Here we have this great French ambassador visiting America and repaying the favor.”

Los Angeles Councilman Joe Buscaino told the Long Beach Press-Telegram: “This ship represents a type of efficiency that will ensure that this port complex remains globally competitive. Today there are seven gangs of longshore (workers) working this ship, which equals about 150 people. Container movement is the heart of our economy here in the harbor area.”

According to a CMA CGM news release, the vessel also produces “as much energy as 900 Ford Focus models.”

“The crew of this self-run enterprise comprises 26 members who operate the various facets of the vessel including its own waste recycle system, chef, and swimming pool, etc.”

The Benjamin Franklin isn’t the largest container ship in the world, however, as that designation belongs to the MSC Oscar. And the Oscar isn’t the longest, but rather, the heaviest. The longest ship is the Seawise Giant, an oil tanker that’s more than 1,500 feet in length.