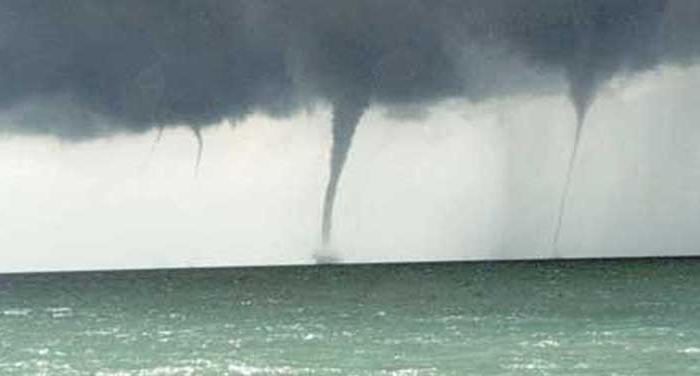 Waterspouts in a file photo. (NOAA)
US News

A large waterspout was spotted off the coast of Hawaii over the weekend, prompting people in the area to take pictures of the weather phenomenon.

People living in Kaaawa, Laie, and other towns on the east side of Oahu reported seeing the waterspout.

According to the National Oceanic and Atmospheric Administration, a waterspout is a whirling column of air and water mist.

There are two types of waterspouts, one called fair weather waterspouts and the other known as tornadic waterspouts.

Check out this photo of a large waterspout seen off Oahu Sunday evening.

@JMollFHS @ReedTimmerAccu awesome waterspout off of Klipper Golf Course on the windward side of Oahu this afternoon! It was down for about 10 minutes and it was roaring pic.twitter.com/7nPRXMGr7t

Hawaii News Now – KGMB and KHNL
“Tornadic waterspouts are tornadoes that form over water, or move from land to water. They have the same characteristics as a land tornado. They are associated with severe thunderstorms, and are often accompanied by high winds and seas, large hail, and frequent dangerous lightning,” according to the administration.

Recent conditions in Hawaii have brought not only waterspouts but snow in some areas and heavy rains in other areas.