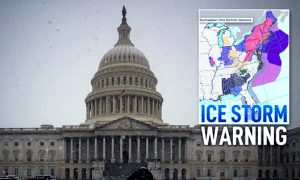 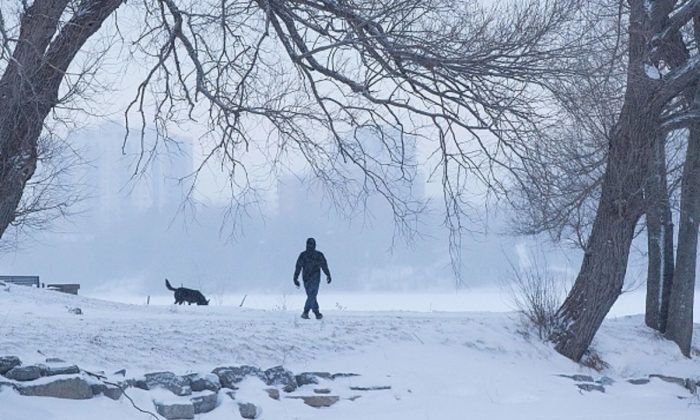 A man walks a dog in a snow covered park in Kingston, Ontario, on January 30, 2019. (Photo by LARS HAGBERG/AFP/Getty Images)
US News

Large Spring Storm to Hammer Much of US With Snow, Winds, and Flooding

Amid rising temperatures across the United States, the Midwest might see another taste of winter.

A so-called “bomb cyclone” is forecast to hit the north-central Plain States and Upper Midwest, according to weather forecasters.

“A rapidly intensifying major winter storm to bring heavy snows through the Northern Rockies, heavy snows and blizzard conditions to portions of the Northern/Central Plains into the Upper Mississippi Valley Tuesday through Thursday,” the National Weather Service warned on April 8.

The WPC forecast for Thursday morning implies that April low pressure records are possible in the central Plains & Midwest. pic.twitter.com/kb2eyOrzT5

According to the NWS’s Weather Prediction Center, there is a “high potential for significant snowfall and strong winds” and possible blizzard conditions from the “north-central Plains into the Upper Great Lakes during the latter half of the week.”

Plains blizzard looking likely late next week as a strong low pressure system sweeps the Heartland. Looks like it could be another “bomb cyclone” depending upon whether it drops 24 millibars in 24 hours or not. Storm track and snowfall amounts uncertain at this time. Stay tuned! pic.twitter.com/EtAx70t6wh

According to CBS News, as of Monday night, the storm system is currently located in the Pacific Northwest and is moving towards the Rocky Mountains before it dumps snow on Colorado and Wyoming on Tuesday.

Models are amazingly similar in forecast snowfall – European, Canadian and FV3 (not pictured here) have bullseyes of 30-40 inches. While that seems unlikely because of heavy compacting of spring snow, numbers even close are “off the charts” for April or really any time of year ! pic.twitter.com/V3k3NwxgPM

The storm is predicted to strengthen when it hits the Great Plains on Wednesday. At that time, the air pressure is forecast to drop to levels that were seen during the “bomb cyclone” that hammered the same areas in March.

“It’s not clear this storm will be strong enough to be deemed a bomb cyclone, as the jet-stream plunge isn’t as sharp as last month’s storm, but it will certainly be an intense low-pressure system that could flirt with all-time April low-pressure records in parts of the Plains,” the Weather Channel wrote.

#WinterStormWesley is likely to bring #blizzard conditions to the Plains and upper Midwest later this week: https://t.co/3KcycAFZoz pic.twitter.com/DwH7LbBgCq

Winter storm warnings and advisories have been sent out to 10 states, including parts of Utah, Wyoming, Montana, South Dakota, Colorado, Nebraska, Kansas, Minnesota, Iowa, and Wisconsin.

“In the swath of heaviest snow, disruptions to travel, including flight cancellations and road closures, are likely,” AccuWeather Senior Meteorologist Dan Pydynowski stated. “This has the potential to include the Minneapolis-St. Paul metro area as well Wednesday night into Thursday night,” he noted.

Up to a foot of snow is forecast in North-Central states, said AccuWeather.

A bomb cyclone is a rapid drop in air pressure — at least 24 millibars in 24 hours — and often is over or near oceans or seas because it requires warm moist air smacking into cold dry air, along with volatile weather from the jet stream.

The central and mountain part of the country may get one of these every few winters, said Greg Carbin, forecast branch chief for the National Weather Service’s Weather Prediction Center in Maryland, according to The Associated Press on April 8.

“This blizzard will further exacerbate flooding in Nebraska with the added insult of heavy snowfall to eventually melt,” said Ryan Maue, a meteorologist at the private weathermodels.com. “This is more bad news for suffering farmers who are unable to flip the calendar on winter,” AP reported.

This week’s bomb cyclone one is expected to be similar in intensity and in snowfall, meteorologists said. Heavy, wet snow will fall from the Nebraska panhandle through south central and southeastern South Dakota into western Minnesota. Wind speeds can reach 50 mph to 60 mph (80 to 96 kph) across Kansas.

The storm, meanwhile, will exacerbate flooding concerns across the Midwest.

In South Dakota and in western Minnesota, the James and Elm rivers could see moderate to major flooding, CNN reported. The Red River could also flood.

The Associated Press  contributed to this report