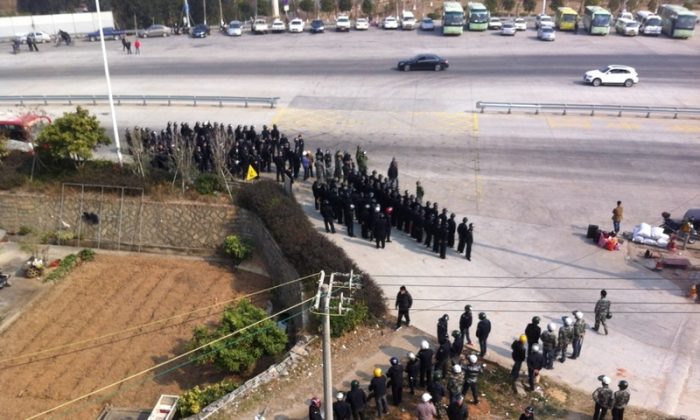 Chinese fishing village sold by officials and villagers barely compensated, beaten up instead
By Xie Dongyan

On Jan. 18, four policemen arrived at Aoshan Villiage, in Putian City, Fujian Province, in an attempt to arrest more innocent petitioners. Upon hearing the news, over one thousand villagers rushed to stop their arrest.

Then the four police called in over 100 armed police. With iron helmets, shields, and batons, they beat anyone in sight.

Though most of the villagers at the scene were elderly or women, they were beaten all the same. To protect themselves from being attacked, the villagers picked up bricks from the ground to fight back, but the armed police also threw bricks at them.

Chen, a villager, told Epoch Times reporter: “The villagers thought the armed police would spare the elderly and women. But to our surprise, they lost their human nature and beat anyone in sight. Five or six armed police encircled a villager to beat him.

“Unable to fight against the police, villagers rushed home and were then dragged outside by the police for further beating. The police also broke into locals’ houses and smashed their windows or walls to let out their anger.”

Aoshan Village is a fishing village near the sea, where villagers make a living mostly by catching clams, sturgeons, octopuses, and crabs. Now the villagers are denied their way of earning a living. They traveled to Beijing and Fuzhou to appeal for their rights, but it was useless.

“About a week ago, one of the villagers went to appeal for his rights, but was detained for fighting back after losing control of his temper. Days later, another three villagers were arrested by the police when making an appeal,” said Chen. “On January 18, four police came to our village, in an attempt to arrest more. Villagers found it unbearable.”

That’s when the fighting broke out.

“According to villagers who work for the government agencies, the central government granted 1.6 billion dollars for the land reclamation project. With 5,000 households in the Aoshan Village, each person should be awarded compensation of 70,000 or 80,000 yuan (US$11,500 or US$13,200).

“With their money illegally taken by the provincial, city, district, or village committee members, there is only 4,000 yuan (US$660) left for each home. The villagers asked the government to disclose the official documents on the land and sea expropriation, but instead of presenting anything, the government arrested people,” said Chen.

On Sept. 10 and 11, 2013, Aoshan villagers had gathered outside the Hanjiang District government to protest severe bribery and misappropriation of villagers’ property by Aoshan village officials and to call for release of detained villagers. The protesters ended up being suppressed by crowds of police and attacked by fire trucks, chili pepper water, and police batons. Many of them were wounded, and over a dozen arrested.

A villager posted on Weibo, “With their only way of living blocked by land reclamation, each villager was awarded 4,000 yuan. Such a phenomenon can’t be referred to as mutual cover among officials or a protective umbrella, but rather confiscation of citizens’ property by officials at all levels. This time, it is not just exploitation of villagers’ money and labor force, but sheer deprivation of their livelihood. How cruel!”