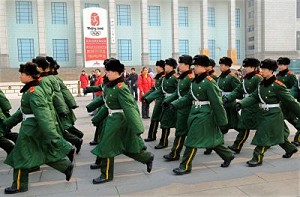 Chinese paramilitary policemen patrol near the Olympic countdown clock showing less than 6 months to go for the up coming Beijing Olympic Games at Tiananmen Square in Beijing on February 18, 2008. According to sources, a large numbers of Beijing Falun Gong practitioners have been arrested before the Olympics. (Teh Eng Koon/AFP/Getty Images)
China

According to sources from Beijing, from the end of 2007 to early this year, at least 100 Falun Gong practitioners with confirmed names (oftentimes practitioners do not reveal their true identity to protect family, friends and colleagues) have been arrested in Beijing.

Some were immediately sentenced to eight months in prison. It is believed to be a new round of suppression by the Chinese Communist Party before the next session of the National Congress in March and the Olympics in August 2008.

According to data from the Falun Gong website Minghui.net, since the end of last year at least 100 Falun Gong practitioners have been secretly arrested in Beijing. According to the latest news from Beijing, there were over 40 arrests between Jan. 23 and 25.

Another Falun Gong practitioner in Beijing, a mechanical engineer named Fang Ping (alias), said that among her friends, some were arrested at checkpoints while driving out of town having been discovered that they were practiced Falun Gong; some were arrested directly from home and carried away. There are police at bus stations, highway exits, and various depots, they have blanketed the entire city of Beijing.

Li said that the Chinese Communist Party's (CCP) suppression of Falun Gong has never stopped. Using the excuse of the Olympics, they attempt to make Falun Gong disappear. Therefore, the arrest of Falun Gong practitioners is planned, systematic, and a progressive step by step action.

Li told the The Epoch Times that the arrests were under direct orders from the Districts Party Commission of Beijing, organized by base level branch offices, community centers, neighborhood committees, police stations, and detention centers; some are responsible for monitoring and some are responsible for arrests. They break into Falun Gong practitioners' homes at will to take pictures of the contents of closets, boxes, drawers, and make arrests whenever any Falun Gong materials are found.

During these large-scale arrests, the police have detained Falun Gong practitioners without giving any reasons, and sent them directly to labor camps for eight months. They will be released just as the Olympic is concluding.

Beatings in labor camps are common, and the labor camp sentence is maintained whether the arrest is legal or illegal. Some labor camps sent the detained practitioners to camps outside Beijing, which hints that the Beijing camps were already full.

Li said that arrested practitioners are sent to brainwashing classes, labor camps, and prisons. In labor camps, people can be sent away or transferred with the signature of the head of the camp alone; so-called appeals or administrative reviews exist in name only.

Some Falun Gong practitioners' families went to the specified labor camps and prisons to ask for the release of their family members, but were told by authorities that they were only following orders from higher up. The claim that “Falun Gong practitioners are against the Olympics” was also used to legitimate illegal actions.

Fang told the reporter that, from February 22, Beijing had started a 39-day action period to clear out residents from outside of Beijing and to centralize the control of temporary resident certificates. She said, “I think this is aimed at Falun Gong practitioners.”

Fang said, “They want to use this means to find those Falun Gong practitioners that they were unable to find previously. To get a temporary resident certificate, one must provide identification, so it enables them to check up on him at his registered permanent residence.”

She said that in addition to Falun Gong practitioners, migrant rural workers, appellants and human rights advocates were all considered bad factors by the CCP, and that the CCP was anxious to clear them before the Games in Beijing.

She said, “When I told my relatives of my experience, they stared in disbelief. They said that a highly educated person like myself suffered such a predicament. The CCP is simply doomed. Actually, Beijing people have been through so many hardships, they know.”

Fang expressed his respect for the famous movie director Steven Spielberg for resigning from Beijing Olympic artistic adviser position. She said, “Spielberg's conscience must have caused him to make this decision.”

Finally, Li and Fang both said they were thankful to have this opportunity to be interviewed by an overseas media to spell out their thoughts, not only about the Olympics but also about the illegal acts of the authorities. They appeal to the international community to stop the CCP's atrocities.