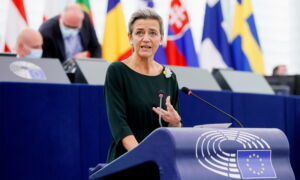 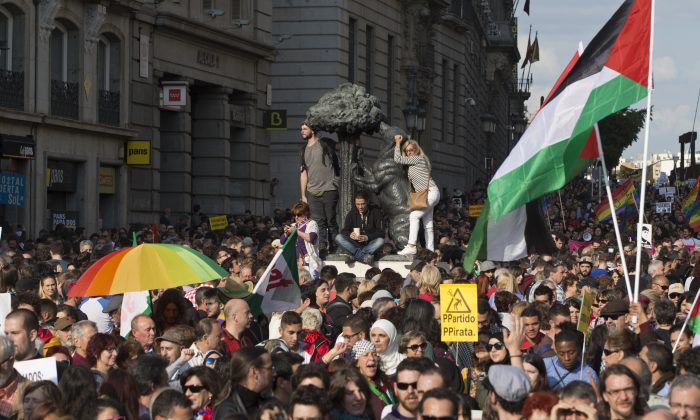 Protesters pack the Puerta del Sol plaza in central Madrid on May 15, 2016. The demonstration is to mark the fifth anniversary of a protest movement that led to the creation of Podemos, now Spain's third most-popular political party. (AP Photo/Paul White)
Europe

Large Marches in Spain on 5th Anniversary of Occupy Protest

MADRID—Thousands of Spaniards marched in downtown Madrid to mark the fifth anniversary of a protest movement that led to the creation of Podemos, now Spain’s third most-popular political party.

The Democracy Now platform had urged people to “occupy squares in all the world’s cities on Sunday” to protest austerity, corruption, high unemployment and a lack of transparency in government.

Madrid’s Puerta del Sol square became the scene of a protest that lasted 28 days in 2011, sparking a movement that spread across Spain and similar “Occupy” sit-ins in cities across the world.

The protests by those calling themselves “Indignados,” or people angered by Spain’s existing political parties, led to the emergence of Podemos, which will vie for power in a June 26 election.

In a bid to break the political deadlock that Spain has endured since an inconclusive December vote resulted in no parties able to form a government, Podemos on Friday announced an alliance with the smaller United Left party under the name Unidos Podemos, which means “United We Can.”

Polls and analysts have said the alliance could get more votes and parliamentary seats than the center-left Socialists.

Spain has been in a political stalemate, governed by a caretaker government with Popular Party leader Mariano Rajoy as prime minister since the Dec. 20 vote, when newcomers Podemos and Ciudadanos upset the longstanding dominance of the Popular Party and Socialists who came second.

National students’ union leader Ana Garcia, 29, who was at Puerta del Sol, said millions of ordinary people expressed their anger on May 15, 2011 and said “no to paying for Spain’s financial crisis.”

“We were not going to pay through cuts to our education, health care and human rights,” Garcia said.

Organizers posted images late Sunday of well-attended marches in cities including Barcelona, Bilbao and Malaga, as well as Paris — all re-enacting the events of five years ago.

Speaking at a political event in northeastern Barcelona, Interior Minister Jorge Fernandez Diaz acknowledged that “those who once occupied Sol” had ushered in a new era with fresh faces elected to parliament, but emphasized that change needed to be achieved by democratic elections and not through blocking streets.