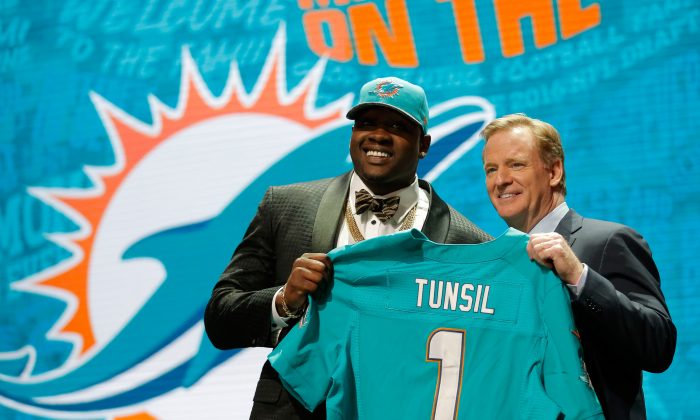 Laremy Tunsil had a tough draft night—for a first-round pick. A highly-regarded offensive tackle out of Ole Miss, Tunsil was seen by many as a top-five pick, but his stock plummeted after an apparent hacking of his twitter feed resulted in a tweet of a video of him smoking marijuana while wearing a gas-mask, just minutes before the draft started.

He was eventually taken by the Miami Dolphins with the 13th selection, but the hacking of his social media accounts wasn’t over.

Later that evening Tunsil, who was suspended by the NCAA for the first seven games of the season last year for accepting impermissible benefits including the free use of three loaner vehicles over a six-month period, had his Instagram account hacked. The hacked post was a screenshot of alleged text messages between him and John Miller, assistant athletic director for football operations, in which Tunsil asks for money to help pay his mom’s bills.

And now Laremy Tunsil’s Instagram has been hacked. This is insane. pic.twitter.com/BKvrNxBA4p

Tunsil was very candid with reporters, after being drafted.

“Like I said, I made a mistake, a huge mistake. Things happened, I can’t control things,”Tunsil told reporters. “Getting my phone, hacking my Instagram, my Twitter. I’m just happy to be here, part of the Miami Dolphins organization. I’m blessed, man.”

Asked whether that meant he had taken money from a coach, Tunsil said, “I’d have to say yeah.”

The admission by Tunsil and the Instagram post—which was entitled “Coach Freeze and the whole Ole Miss program are snakes. They cheat!”—could be devastating to a Ole Miss program that is already in the midst of an investigation with the NCAA.

As for Tunsil, multiple reports had the Baltimore Ravens passing on the five-star tackle after the marijuana-smoking video was released just minutes before the draft. The Ravens, which had the sixth pick, instead opted to take Notre Dame tackle Ronnie Stanley. The Tennessee Titans, who were also in the mix for a tackle, then selected Michigan State tackle Jack Conklin, who was widely considered the third-best tackle in the draft behind Tunsil and Stanley.

Meanwhile, a former financial adviser to Tunsil was blamed for the social media hacks.

According to one NFL team, a financial advisor who was fired by Tunsil could also be responsible for the social media leaks.