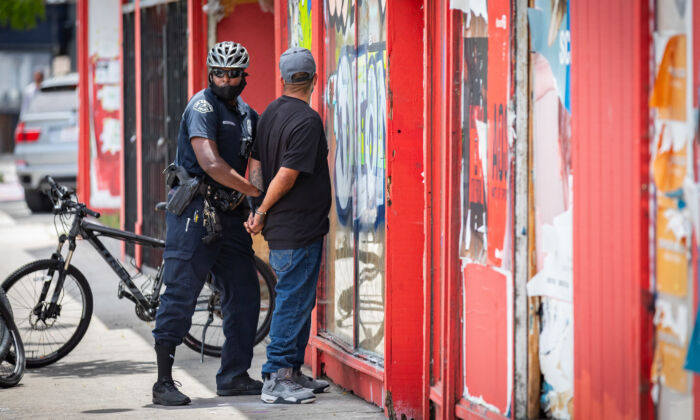 LOS ANGELES—The Los Angeles Police Department (LAPD) is warning residents to leave their expensive jewelry at home to avoid making themselves targets amid a surge in violent crime across the city.

The department issued a notification advising residents to travel in groups and remain in well-lit areas to deter opportunists. The advisory also went as far as to encourage residents to take a different route home.

“In the event a person is approached during a robbery, especially when armed with a firearm, the department encourages victims not to resist. No property is worth the risk of loss of life,” the advisory said.

Robberies with a firearm account for 36 percent of all citywide crime and for 74 percent of the city’s overall robbery increase within the last year.

“Most concerning is that there has been an increase in the levels of violence used during these robberies and the frequency in which a firearm was used,” LAPD Chief Michel Moore said in a statement earlier this week.

Shooting victims, homicides, and shots fired into occupied homes are up in the city, according to the Los Angeles Police Protective Union, one of LA’s largest police unions with more than 9,900 current LAPD officers.

“Violent gun crimes have touched every neighborhood in Los Angeles and the criminals have become so bold and brazen that what should be an enjoyable night out to dinner must now include a plan on how to safely make it to your car and get home without being victimized,” a spokesperson for the police union Tom Saggau told The Epoch Times in a statement.

Saggau said when the “police chief is instructing residents to learn how to shake a tail from a car following them home,” it’s “well past time for voters to hold appointed and elected officials accountable.”

Last year, the LAPD police chief created a violent crimes task force to increase community engagement and put more patrol officers on the streets to lower crime. In September, the LAPD wrote on Twitter the task force was successful and saw a 56 percent decrease in violent crimes in Boyle Heights.