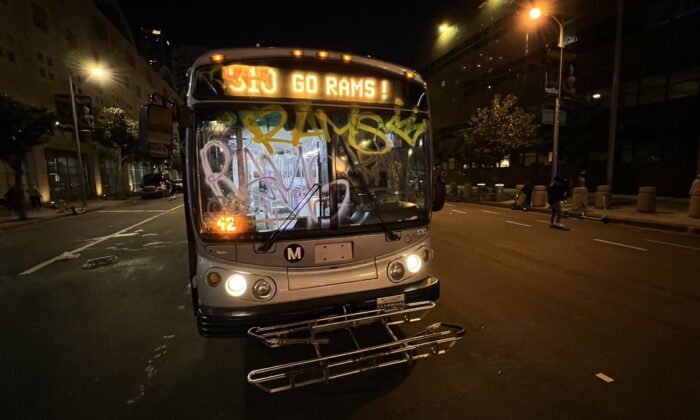 Jamie Joseph
Jamie is a California-based reporter covering issues in Los Angeles and state policies for The Epoch Times. In her free time, she enjoys reading nonfiction and thrillers, going to the beach, studying Christian theology, and writing poetry. You can always find Jamie writing breaking news with a cup of tea in hand.
View profile
Follow
and Vanessa Serna

LOS ANGELES—The Los Angeles Police Department (LAPD) issued several dispersal orders and an unlawful assembly after the LA Rams took home a triumphant win in the Super Bowl LVI on Feb. 13, as “large, violent and destructive” crowds became uncontrollable in the heart of downtown, according to the LAPD.

“There are a group of individuals that have refused to leave since the first dispersal orders were given,” LAPD spokeswoman Meghan Aguilar told The Epoch Times at approximately 11:25 p.m. “At this time, we’re just trying to disperse the crowd and arrest anyone that committed criminal acts tonight.”

LAPD first issued a dispersal order asking everyone to leave the downtown LA area around 9 p.m. after a faction of individuals violently took to the streets, jumping on cars and unconfirmed reports of businesses being broken into, seen in videos uploaded on social media.

At 9:49 p.m., LAPD advised individuals to avoid driving into the areas of 11th Street and Hope Street as well as the Downtown LA area bordered by Olympic Boulevard on the north, Pico Boulevard on the south, Figueroa Street on the west, and Broadway on the east, according to the department’s Twitter page.

“Those involved in criminal activity and those failing to obey dispersal orders are subject to arrest,” LAPD wrote on Twitter at 11:11 p.m. Feb. 13.

LAPD also received calls of businesses being looted, but as of 11:30 p.m., the reports haven’t been confirmed, according to Aguilar.

Meanwhile, a shooting was reported in East Los Angeles at around 8:50 p.m., shortly after the Super Bowl game ended.

“We don’t know what led up to it,” LA County Sheriff spokeswoman Tracy Koerner told The Epoch Times. “It was occurring near a [Super Bowl] celebration.”

The car-to-car shooting occurred near Atlantic Boulevard and Verona Street. The gunshot victim was transported to a nearby hospital with non-life-threatening injuries, Koerner said.

While footage on Twitter shows some individuals wearing Rams gear, it’s unclear whether everyone involved were football fans.

“Sometimes people will come into an area looking for an opportunity to engage in this sort of behavior, so it’s hard to say if they’re even football fans,” Aguilar said.

In footage uploaded on social media, fans can be seen igniting fireworks and climbing light poles and city buses. Some individuals appear to be vandalizing a city bus, spraypainting “Go Rams” on the windshield of one while the bus driver was still inside.

Police recovered a loaded firearm from two individuals in a vehicle doing donuts at 11th Street and Figueroa Street, according to the LAPD. One suspect was arrested.

Meanwhile, in East LA, Sheriff Alex Villanueva wrote on Twitter at 12:01 a.m. on Feb. 14 that his deputies dispersed “a rowdy crowd” on that side of town.

The sheriff said additional deputies would be deployed if assistance is needed in other jurisdictions.

Los Angeles law enforcement personnel began gearing up weeks in advance for the sold-out Super Bowl game with over 70,000 people in attendance by expanding security measures and cooperating across departments.

Working alongside LAPD, the Los Angeles Sheriff’s Department, the Secret Service and Department of Defense, and FBI agents plunged into the Southland region of Los Angeles in preparation for the game leading up to the highly anticipated event.

While most of the major procedures involved maintaining safety during the actual game—such as a helicopter that can detect radiation from the Department of Energy Nuclear Security Administration and scanning devices to sense weapons or explosives—their combined horizon is expected to reach beyond the bounds of DTLA and Inglewood.

LAPD Chief Michel Moore told reporters a few days before the game that the Super Bowl’s beefed-up security would last into Feb. 14, which includes “actual added deployments between now and the day after the Super Bowl, for the activities related to this celebration.”