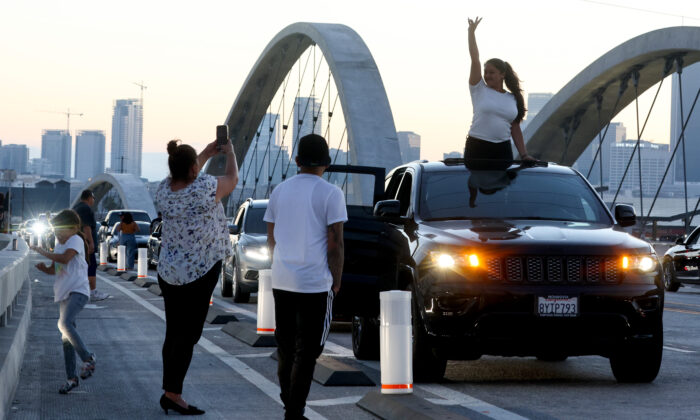 LOS ANGELES—Two weeks after it opened to great fanfare, the Sixth Street Viaduct Bridge was closed overnight—for the fourth time in five days—but the span was reopened Wednesday, and a city council committee was planning to discuss the issue Wednesday afternoon.

“The Sixth Street Bridge will be closed until further notice due to illegal activity and public safety concerns,” the Los Angeles Police Department (LAPD) wrote on Twitter around 9 p.m. Tuesday night.

However, the span was reopened about 4 a.m., the LAPD reported.

An LAPD spokesperson told ABC7 that the bridge was closed Tuesday night after about 100 bicyclists descended on the viaduct and someone caused a safety concern. No citations or arrests were announced.

It was the fourth time in five nights that police decided to close the $588 million bridge, which opened to the public on July 10 and connects Boyle Heights and the downtown Arts District.

The bridge was also closed overnight Saturday due to a traffic collision involving a pickup parked in a no-parking zone that was struck by another vehicle.

“After a 2 hour closure, the bridge was opened,” the central division wrote on Twitter late Friday. “In less then an hour, 200 people arrived for a street takeover, fireworks and vandalism. Maximum enforcement will continue over the weekend.

On Saturday, Moore wrote on Twitter one word: “Unacceptable.”

The bridge was closed for about two hours Friday evening because of a crash at 9:55 p.m., according to LAPD Officer Rosario Cervantes prior to that night’s takeover.

Cervantes said no arrests were made in that instance. However, the Central Division wrote on Twitter that anyone who parks on the bridge will have their vehicles cited and/or towed, and anyone present at a bridge takeover will be cited.

In the days since it opened, several street takeovers have been reported on the viaduct, which connects Boyle Heights and the downtown Arts District and replaced one of the city’s most iconic structures—an earlier bridge that also drew its fair share of “stunts” during its more than 80-year history.

Video on social media from last weekend showed drivers spinning their wheels and performing other antics on the bridge, leaving the pavement scarred. Some people even crawled onto the ribbon-like arches that line the bridge to get elevated views of the action.

Other isolated incidents have included a man getting a haircut in the middle of the bridge Wednesday and another shadow boxing while wearing a red cape. The driver of a car involved in a July 18 crash abandoned the damaged Dodge Charger on the bridge and fled on foot.

The opening of the Sixth Street Viaduct marked a key milestone in a construction project that began in 2016 to replace a 1932-vintage structure. The original bridge was an iconic Los Angeles landmark, seen in movies including “Grease” and “Terminator 2: Judgment Day,” but its aging structure was deteriorating, leaving it seismically unsound.

The city’s Bureau of Engineering has said future plans call for the downtown side of the bridge to include a rain garden, a planted seating area, a play and performance lawn, a sculpture garden, a meadow, a dog play area, an adult fitness section, cafe and restrooms, a sloped river gateway, an urban forest, and terraces.

On the Boyle Heights side, the park’s plans include a skateboard area; a meadow; a picnic area; a synthetic turf soccer field; flexible courts sized for basketball, futsal, and volleyball; a play and performance lawn; a children’s play area; a promenade; a landscaped seating area; an adult fitness area; a rain garden; a dog play area and grilling spaces.