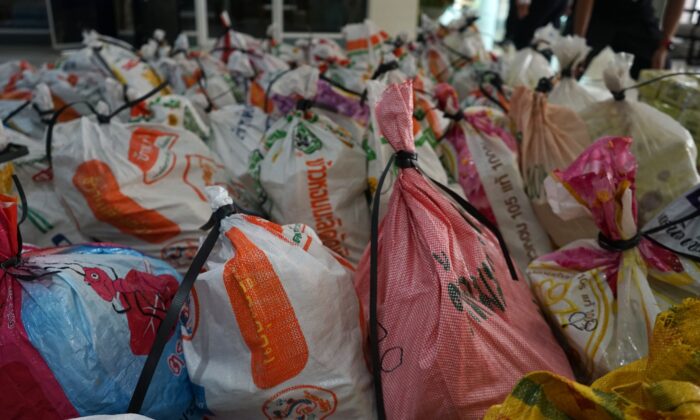 Bags of the drug crystal meth, also known as "ice", after they were seized by Thai authorities in Bangkok on on June 5, 2019. (Aidan Jones/AFP via Getty Images)
Asia & Pacific

BANGKOK—Police in the Southeast Asian nation of Laos have made one of Asia’s biggest-ever drug busts, seizing more than 55.6 million methamphetamine pills in a single raid. The drugs were found in the northern province of Bokeo, the state-run Vientiane Times newspaper reported Thursday.

The drugs were found Wednesday in sacks in a house that police searched after earlier discovering 10 million tablets hidden in beer crates on a truck on its way to the capital, Vientiane, the newspaper said in an online report. Information from the truck driver led them to the house, where 65 bags of crystal methamphetamine, also known as ice, were also found, it said. Lao National Radio said they weighed a total of 1,537 kilograms (3,380 pounds).

Two men were said to be under arrest. The newspaper said the Lao Brewery Company, the owner of the crates, issued a statement denying involvement in drug smuggling. “We are deeply disappointed that our crates have been abused as a cover for illegal activities,” it quoted the statement as saying.

On Monday, police found 6 million amphetamine tablets hidden in a pickup truck driving through the province, the newspaper said. Bokeo borders Thailand and Myanmar and is part of the Golden Triangle, a remote geographical area with a long history of involvement with illegal drug production and smuggling.

In a report released in June 2021, the United Nations Office on Drugs and Crime said production and trafficking of synthetic drugs in East and Southeast Asia has surged despite the coronavirus pandemic. It said criminal syndicates adapted to and capitalized on the situation.

Laos is well known as a transit point for drugs from Myanmar, a major producer of methamphetamine, that go to Thailand, Vietnam and points beyond. Laos is a poor, sparsely inhabited landlocked country with a reputation for corruption that can facilitate smuggling. The non-governmental group Transparency International ranked it 137th out of 170 countries on its Corruption Perceptions Index, which ranks countries by their perceived levels of public sector corruption.