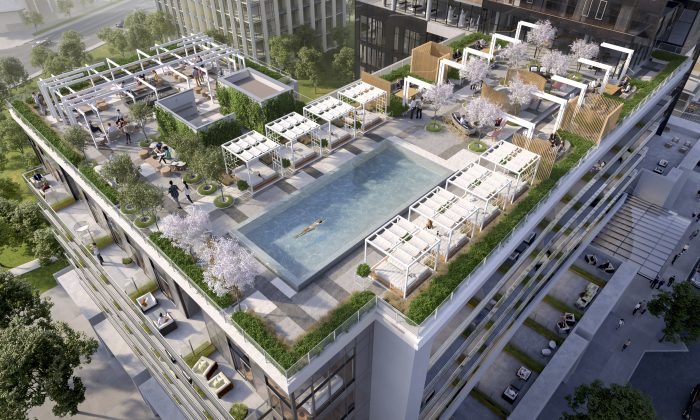 Lanterra Launches Next Condo for Shops at Don Mills

Lanterra Developments and Cadillac Fairview go way back when it comes to transforming Toronto.

More than a decade ago, the companies partnered on the development of Maple Leaf Square, a mixed-use condo project that pioneered South Core, now a bustling retail-entertainment destination. They followed it up with Ice Condos, landmark towers at the foot of York Street that have helped further reclaim what was once a no-man’s land between the railway corridor and the Gardiner Expressway.

“We have an excellent working relationship,” Lanterra chairman Mark Mandelbaum tells Epoch Times. Which is why Cadillac Fairview invited his firm to partake in the next stage of residential development at CF Shops at Don Mills—another transformative project, Ontario’s first outdoor urban-lifestyle retail centre.

Lanterra will develop four condo buildings, all with retail at the ground-level lining a southward extension of O’Neill Drive (where Joey Restaurant is located, and Taylors Landing just opened). The first phase, launching this fall, is Rodeo Drive, a 32-storey tower with 425 units (priced from $280,900 to over $586,900).

Lanterra’s residential development will complement Cadillac Fairview’s recently announced $21 million revitalization of Shops at Don Mills (more on that below). “We’re typically downtown builders, we tend to stay in the core,” Mandelbaum says. “But a unique location like this definitely attracted our interest. We quickly recognized it’s a great site.”

Rodeo Drive—designed by David Pontarini, the hometown architectural hero behind One Bloor and Massey Tower—will be modernist-inspired, with a black and white palette, perforated metal screens, articulated pre-cast panels and fritted white glass. “It’s important that our buildings look great 10, 20 years from now—they can’t be fussy or faddish,” says Mandelbaum. “David did a great job. We’re quite pleased.” A 16-storey building will follow Rodeo Drive, along with two others farther down the line.

Amenities at Rodeo Drive include a 24-hour concierge, indoor lounge area, party room with dining, hosting kitchen and bar/lounge. The building will also have a fitness centre with sauna, outdoor pool with lounging deck, and a separate outdoor lounge area with barbecues.

Having named the project Rodeo Drive—a nod to the Southern California inspired shopping and lifestyle experience Shops at Don Mills sought to recreate in the Great White North—Mandelbaum says his team felt compelled to put in “better finishes than you’d typically find in the market for this level of pricing.”

Fram Building Group built the first three condo projects at Shops at Don Mills: Liv Lofts, Flaire and Reflections. Based on the profile of those who bought there—end users mostly—Mandelbaum expects Rodeo Drive and subsequent phases to attract a similar crowd. “We actually think there’ll be strong interest from people from outside the area, once they discover the attributes of this community.”

Cadillac Fairview is working to further enhance those attributes with a revitalization of Shops at Don Mills that’ll include widened sidewalks, new cobblestone roadways, and an additional entertainment zone for increased on-site programming.

The revamp also will add new shops, restaurants and services to the mall’s 100-plus-retailer roster, which boasts Canada’s first Anthropologie store, celebrity chef Mark McEwan’s high-end grocery shop Fabbrica, Bier Markt, Glow grill and wine bar, and the aforementioned Joey and Taylors Landing, among others. Great news for future foodies living at Canada’s very own Rodeo Drive, notes Mandelbaum. “There must be seven or eight city-wide famous restaurants that’ll be within 50 feet of the front door.”