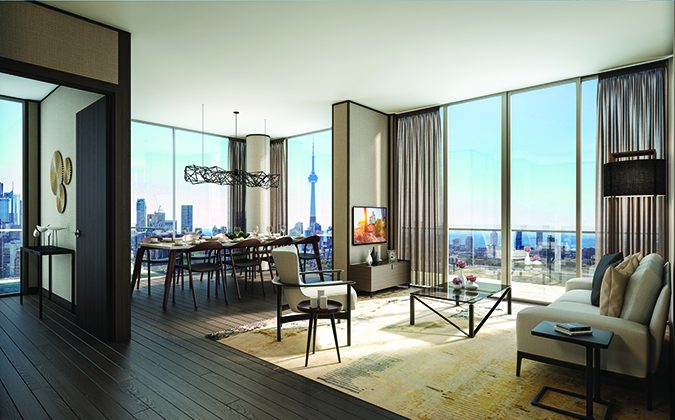 More than 21,000 condo units were sold in 2014, one of the GTA’s best years on record. Lanterra Developments, which launched two of 2014’s most successful projects—Teahouse at 501 Yonge St. and Wellesley on the Park at 11 Wellesley Ave.—was responsible for a substantial number of those transactions.

Combined with ongoing sales at The Britt, Lanterra’s redevelopment of the Sutton Place Hotel, and Treviso, a multi-phase condo project at Dufferin St. and Lawrence Ave., the builder sold more than 2,000 units in 2014, according to president Barry Fenton. “We represented about 15 percent of the total market last year,” he tells Epoch Times in an interview at the company’s Dufferin Street HQ.

And things show no signs of slowing down in 2015.

Fenton’s team is gearing up to launch the second phase of Teahouse, which will include about 400 units. A mixed-use complex with two towers (52 and 23 storeys), Teahouse will have a total of 776 suites and 20,000 square feet of retail space at its base (restaurants, shops and services, plus an actual teahouse), helping rejuvenate a somewhat seedy stretch of Yonge.

“It needs a revitalization and we’re going to give it one,” Fenton says.

“That’s not to say there’s anything wrong with the little mom and pop shops there at the moment,” he adds. “It’s just too valuable (a site) and that’s not the best use. It reminds me of having two-storey buildings on Boardwalk when you play Monopoly.”

(Fenton points out that Lanterra purchased the rare full-block site from a Hong Kong-based seller who he’d personally wooed over the course of several years. “I travelled there three times.”)

Just down the road from Teahouse, work continues on Lanterra’s Wellesley on the Park project. As the name suggests, the development will include a 1.6-acre public park, a big boon for an intensely urban neighbourhood that’s been lobbying for years to have the long-vacant site turned into green space.

Lanterra sold 85 percent of the 700 units at Wellesley on the Park in 2014, making it the year’s second most successful launch after Dundas Square Gardens.

In setting aside valuable real estate for the park, which Fenton says will take up more than two thirds of the property, Lanterra is combining its parkland dedication requirements for the Wellelsey site with those for Teahouse and The Britt. “It was the key in the car that got us going on that. That’s allowed us to solidify three projects within the span of 200 yards.”

One thing that’s consistent across all of Lanterra’s developments is the essential role played by Asian investors. “The Chinese community has been more than supportive in our projects over the last 15 years,” Fenton says, adding, “They’re meticulous in what they want to buy, and when they want to buy it.”

It helps that Toronto real estate enjoys a sterling reputation internationally. “If you compare what the market’s like in Hong Kong and Singapore versus here, hands down there’s more perceived good value here than anywhere else in the world,” he says.

Launched by Fenton and business partner Mark Mandelbaum back in 2001, Lanterra has demonstrated a talent for transforming overlooked areas into bustling mixed-use communities.

Case in point: The duo turned the no-man’s land between Front Street and Lake Shore Boulevard into a bustling hub of condos, shops, restaurants, and entertainment, with the two Residences of Maple Leaf Square towers, Hôtel le Germain, offices, and more than 100,000 square feet of retail adjacent to the Air Canada Centre. Just down the road, at the northwest corner of York Street and Lake Shore, the soon-to-be iconic towers of Ice Condos are nearing completion.

It’s the same story at the burgeoning Fort York neighbourhood. Lanterra’s maiden development, WaterPark City, was part of the first wave of condos at Bathurst and Fleet Sts, an area now teeming with residential projects. Ditto with Treviso at Dufferin and Lawrence, where Lanterra is introducing a mixed-use condo complex to a section of town that’s currently populated primarily by dreary strip plazas.

“Toronto Life called us trail-blazers,” Fenton says. And he concurs wholeheartedly with the characterization. “Nobody else in the city, I believe, has our creative vision.”