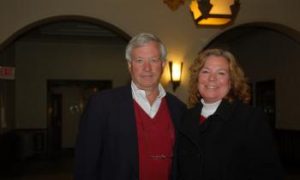 Lang Lang cancelled a concert scheduled for Saturday night in Buffalo. A leading Chinese dissident sees in this cancellation a sign that Lang Lang is now beginning to pay a penalty for his promotion of the Chinese Communist Party (CCP).

In an interview with The Epoch Times Wu Fan, economist, commentator on China, and president of the China Interim Government spoke about the significance of Lang Lang’s performance being cancelled, “After he was used by the CCP, bad luck has befallen him—I just did not expect it to come so soon.”

The Buffalo Philharmonic Orchestra announced on Saturday that Lang Lang was ill with a stomach virus and that his concert would be postponed until sometime in July.

Lang Lang recently aroused a firestorm of controversy by playing “My Motherland,” the theme song from an anti-U.S. film “The Battle of Shangganling,” at President Obama’s state banquet for the Chinese Communist Party (CCP) Chairman Hu Jintao.

The arrangement of “My Motherland” used by Lang Lang included a quote from another famous anti-U.S. propaganda song, “Battle Hymn of the Heroes,” which is the theme song of the anti-U.S. film, “Heroic Sons and Daughters.”

Wu listed several possibilities for the concert’s cancellation: Lang Lang might really be ill; the concert organizers might have prevented him from playing (“Communities in the United States are very concerned about this issue, as it directly affects the United States’ national dignity and character,” said Wu); he might have faked his illness in response to the widespread criticism of his actions.

“No matter what the truth is, it is the beginning of disaster both physically and career-wise for Lang Lang,” said Wu.

Wu Fan believes Lang Lang is a victim of the CCP’s rule and culture.

“Though he came to the United States in his teens and has enjoyed Western civilization and freedom, his mind was still filled with stuff instilled by the CCP’s doctrine and therefore he was controlled by the CCP,” Wu said.

Wu believes that Lang Lang playing an anti-U.S. piece at the U.S. state dinner was not a coincidence; he sees this incident as typical of how the CCP uses artists for propaganda.

Wu said, “Lang Lang has enjoyed many benefits in the United States, yet he was not thankful, performing a piece filled with the CCP’s propaganda that instigates hatred.”

Wu is concerned how Lang Lang’s actions will affect other Chinese. “Such double-dealing behavior not only insults Americans, but also harms the wellbeing of many Chinese.”

“It is not that they lack ability or intelligence; they are simply not trusted. Some Chinese students are still under the influence of the CCP, which includes the students stealing American high technology.”

According to Wu, Lang Lang is potentially another example of the tragic consequences for artists of working with the CCP. “If he cannot succeed in the United States any longer, he will not thrive in China either. He will no longer be valuable to the CCP.

“In the past several decades, many excellent artists were either persecuted by the CCP or used and disposed of. There are many examples.”

Wu called for Lang Lang to oppose the CCP and hoped that other artists can learn from this experience and stop supporting the CCP.