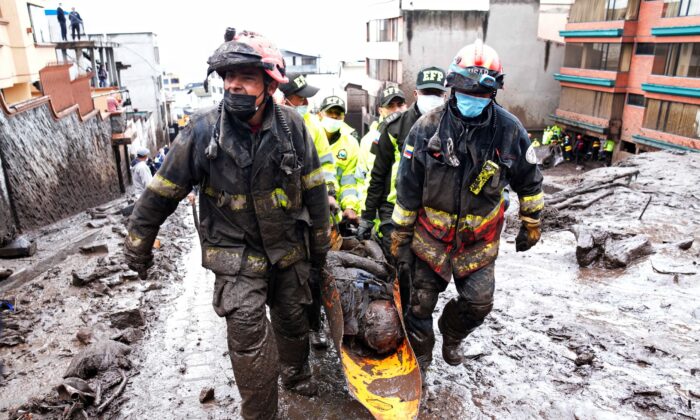 Rescue workers carry away the body of a victim of flash flooding triggered by rain filling up nearby streams that burst their containment mechanisms, collapsing a hillside and bringing waves of mud over homes in La Gasca area of Quito, Ecuador, on Feb. 1, 2022. (Dolores Ochoa/AP Photo)
Americas

The Quito Security Department said at least 48 more people were injured, while eight houses collapsed and others were damaged when the hillside gave way late Monday. The authorities also reported 12 missing people.

Neighbors joined rescue workers in hunting through the ruins for survivors of the disaster that hit following nearly 24 hours of rainfall.

The storm was pounding outside when Imelda Pacheco said she felt her house move as if an earthquake had struck. Suddenly water and rocks began to pour in through doors and windows and she fled before the building was destroyed.

“I barely had time to grab the hand of my 4-year-old son and I ran to the stairs, to the terrace. Suddenly the walls in front and to the side disappeared,” she told The Associated Press.

“We shouted to the neighbors on the first floor, but the water carried away the mother and daughter,” she said, standing before the ruins of her home.

“I thought I was going to die with my son. I hugged him strongly and we shook, I think from the cold and the fear.. We barely survived,” she added, breaking into tears.

Waves of mud, some 3 meters (10-feet) high, carried vehicles, motorcycles, trash bins and other debris under a heavy rain in the neighborhoods of La Gasca and La Comuna below the slopes of the Ruco Pinchincha mountain.

As the rescue began, police called for silence so cries of those trapped could be heard.

Smaller waves of muddy water continued pouring down the ravine Tuesday past weary neighbors trying to move stones, tree trunks and debris. An overturned taxi and other vehicles were partly buried in mud on a sports field.

“I’ve lost everything. I don’t have anything. Everything is over,” said 65-year-old Laura Quiñónez, who stood beside an ambulance as her neighbors tried to recover appliances from their destroyed homes.