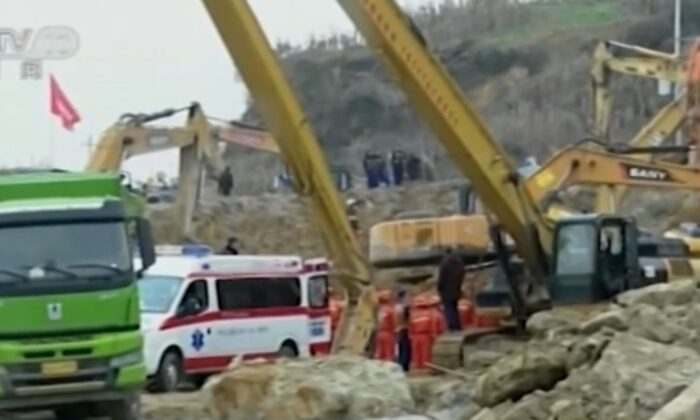 Rescue workers and excavators at a construction site hit by a landslide in Bijie city, Guizhou Province, southwestern China, on Jan. 4, 2022. (CCTV via AP/Screenshot via The Epoch Times)
Social Issues

BEIJING—A landslide at a construction site in southwestern China has killed 14 people and injured three others, official reports said Tuesday.

The cause of the landslide Monday evening in Bijie city in Guizhou Province is under investigation, the reports said.

Workers were building a training facility for a hospital at the time of the landslide. Mountainous, inland Guizhou is one of China’s least developed regions.

Workplace accidents are a recurring problem in China as a result of managers cutting corners, lax enforcement of safety standards, and decaying infrastructure.

Among China’s worst accidents was a massive 2015 explosion at a chemical warehouse in the port city of Tianjin that killed 173 people, most of them firefighters and police officers.