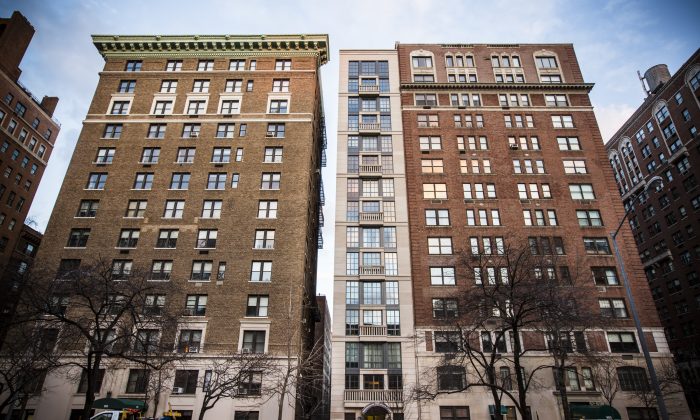 985 Park Ave. on the Upper East Side, Manhattan, New York, March 20, 2014. A glassy building was built in place of a historic building while the Park Avenue Historic District application was pending. (Edward Dai/Epoch Times)
New York

NEW YORK—“History is for losers,” says history professor Kenneth Jackson, who teaches at Columbia and is best known for his work as an urban historian in the city.

Jackson’s argument is a polarized one, and supporters of landmark preservation have staunchly disagreed. And since the Real Estate Board of New York (REBNY) released a report showing high correlation between historic districts (which now cover 30 percent of Manhattan) and the lack of affordable housing (only five new units were built in these districts in the last ten years), the argument for or against landmark preservation has also been increasingly politicized.

“[Preservation] is used as a political tool rather than a tool to preserve buildings,” said Nikolai Fedak, founder of New York YIMBY. “Politicians like to take advantage of the of the confusion of the ordinary people.

He points to the “spectacle” of the slated demolition for the Rizzoli bookstore on the Upper West Side. Despite the fact that the bookstore is planning to move to another location in the city, it has received much more attention and a large community outburst while the neighboring Chickering Hall’s demolition is quietly slipping under the radar.

Yet Chickering Hall on 57th Street, considered one of architect George Post’s finest designs, is much more worthy of preservation, Fedak said.

The Midtown East Rezoning proposed by the previous administration was also contentious and dragged into a political debate about things other than its original intent of driving economic development.

“It was a zoning plan, not a vision,” explained Ronda Wist, vice president of preservation at the Municipal Art Society, which pointed out many problems with the original plan.

But many equate preservation proposals with trying to curb development, and the Midtown East debacle was no exception.

“Why weren’t you … or any other organization calling for the landmarking long before the Midtown East Planning was proposed?,” asked REBNY president Steven Spinola at the panel.

Three organizations presented a list of 83 buildings worthy of preservation when the rezoning plan was unveiled, and only three buildings appeared on every list. Eventually, they all agreed on a list of 16 buildings.

Nearly a third of Manhattan has been designated a historic district and 15 neighborhoods city-wide are asking for the same. REBNY’s stance has been that all these thousands and thousands of buildings can’t all possibly be worthy of preserving forever.

Wist agreed, to an extent. Landmarks should be revisited by the Landmark Preservation Commission (LPC), she said, rather than being set in stone for perpetuity.

“Eleventh hour pushes for designation are very difficult,” Wist said. “Just because something is in danger doesn’t make it more important.”

Including air rights, should they be able to resell the rights more easily, historic districts offer 2.6 billion square feet of developable space.

Some argue that historic districts are even more important than individual landmarks, as they preserve the character, the look and feel of a certain period of time, creating tangible history in the city.

“The pure numbers don’t really speak to it themselves,” said Wist.

“It’s recognized here and across the country as an important tool to create modern, livable cities,” said Peg Breen, president of the New York Landmarks Conservancy. It attracts tourists, it keeps people in the neighborhoods, and it keeps the fabric of the city varied and interesting.

In this context the landmarking debate becomes one of aesthetics, which Jackson has no interest in.

“New York is about change and energy and not about charm and graciousness and contextual aspects,” Jackson said. “If you’re more comfortable with fish, trees, and aging houses, move to Vermont.”

Despite the polarized views on landmark preservation in the city, panelists mainly agreed the problem lies with the process of designating landmarks and historic districts.

“There is room for discussion and room for an improved landmarks process,” Breen agreed.

The new Housing Commissioner Vicki Been and Planning Commissioner Carl Weisbrod have both also spoken towards a more flexible landmarks process, allowing for easier sales of air rights in wake of the city’s housing crisis.

Land prices in New York City are expensive, and landmarking only adds to the problem, going against the administration’s goal of creating affordable housing, Jackson said.

He compares New York City to Boston, Detroit, and Philadelphia—cities that boasted of old streets and buildings when they couldn’t compete with the growth and change of a once-dynamic New York City. “History is for losers.”

Now, he says, global cities are eating New York for lunch, because New York is not building nearly enough.

“New York is about change and energy and not about charm, and graciousness, and contextual aspects,” Jackson said. “If you’re more comfortable with fish, trees, and aging houses, move to Vermont.”

“It’s recognized here and across the country as an important tool to planning a modern, livable city,” said Breen, of the landmarking process.

Breen points to tech-giant Google, which is currently based in an art deco Chelsea building rather than a sleek high rise. These are the young professionals the city is trying to attract, and they prefer neighborhoods with character, she said.

“It’s wonderful that New York has such fabulous architecture that is worth saving,” Breen said.

Fedak said the landmarking has become a political tool rather than a historic or architectural evaluation.

Worse, “politicians like to take advantage of the confusion of the ordinary people,” rousing communities over buildings just because they are in danger, regardless of their value to the economy and neighborhoods.

Rather than using landmarking as a way to restrict development, the city should encourage and subsidize the restoration of these buildings while allowing for more square footage, he said.

“We need to build with a sense of permanence,” Fedak said.

“The process is out of control,” Spinola said. Buildings and districts are calendared for years by Landmarks Preservation Commission (LPC) and there is no set timeframe for the department to make a decision.

Historic districts are also designated in large swaths, and he finds difficulty believing all of those buildings could possibly be worth preserving for perpetuity.

Once a building is landmarked, between LPC, the Buildings Department, and the Planning Department, there are extra processes, more expenses, and more paperwork, in owning a building than otherwise. One of the extra costs comes from the specific materials allowed in the building restorations.

Wist said there is a need to move away from the numbers and look at the historic districts themselves.

“The pure numbers don’t really speak to it themselves,” Wist said. “Preservation is a very nuanced field; it’s very gray.”

The LPC was created 50 years ago after the demolition of Penn Station, and all of the members were then volunteers. The buildings designated landmarks were new at the time as well, and the situation has now changed.

Wist advocated for the designated buildings and districts to receive a second look, rather than being preserved perpetually as a blanket rule.

The Municipal Art Society is working on fundraising to study the process and it public value with all stakeholders.

“We need to understand how this process can work better, what’s important, what’s the public purpose being served by preservation,” Wist said.