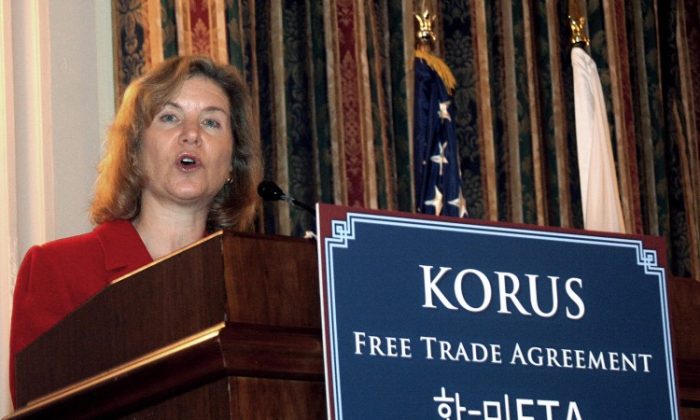 The Korea-United States Free Trade Agreement (KORUS FTA) will take effect on March 15, signifying the most monumental step for American exports since the North American Free Trade Agreement (NAFTA). But the bipartisan-supported, comprehensive trade agreement may only scratch the surface of rudimentary issues.

“It is the most important trade legislation since NAFTA agreement in 1994,” said Neal Asbury, president of The Legacy Companies, a leading global distributor of quality food-service equipment.

Asbury concurs the agreement “covers all of the aspects of the trade relationship,” serving as a model “template that should be used with more trade partners.”

According to Asbury, the U.S deficit resides with countries like China, India, Brazil, and Japan, and similar agreements should be made with those countries particularity. “My only regret is that we haven’t done the same thing with where our real problems are,” he said.

“In a few short weeks … tens of thousands of export-supported jobs with better wages – will start to come home for American businesses and working families,” stated Ambassador Kirk.

The White House believes the ability to create jobs relies on the ability to export goods and services. In 2010, exports supported an estimated 9.2 million American jobs, all “positions that pay well,” the White House claims. “Americans whose jobs are supported by goods exports earn 13 to 18 percent more than the national average.”

According to ITC jobs will be created more in technological areas such as machinery, electronics, transportation, and medical devices, due to tariff eliminations of already existing trade flows. But for sectors with little pre-existing trade, the job flow may not be much.

For the farming industry, there are “relatively small increases in output and employment for agriculture … with the largest increase as 2 percent for the meat sector,” ITC states.
American Manufacturing Trade Action Coalition (AMTAC) says it is impractical for some to export products to travel “several thousand miles across the Pacific Ocean to a market where our competitors in China and Japan are right next door.”

“We oppose it because it is not truly a zero for zero market opening,” said David Trumbull, vice president of International Trade at National Textile Association. “We don’t ship that much over there, and the 10 percent added value tax will help even less.”

“Also, their phase out schedule is not fairly balanced,” Trumbull said. “The U.S. goes to zero quickly on almost everything, while South Korea will have a longer phase out over a number of items of interest.”

“It’s not a reciprocal agreement,” he said.

According to the American Manufacturing Trade Action Coalition (AMTAC), in “almost every free trade agreement (FTA) of the United States: our FTA partners sell more to us than we to them.”

The biggest concern was over the growth of the investors-state system, an issue that existed since NAFTA. According to Tucker, the issue involves allowing corporations to challenge the regulations of another country.

This brings “serious threats to our environmental policy, financial regulation, and other consumer policies,” Tucker said.

According to Chandler Goule, vice president of government relations for National Farmers Union, the issues the agreement address do not fix anything in essence. “When it comes to environmental issues and international labor standards, one of our major concerns is that “the national products are ruled by a 35 percent threshold,” he said.

“You can assemble something in South Korea, but only 35 percent of the raw materials had to come from South Korea to be labeled as a South Korean product,” Goule explains. He indicates the rule will lead to humanitarian violations by South Korea’s neighboring countries, where manufacturing parts may be coming from. Labor law violators of “those countries will still be supported by U.S. dollars.”

The Economic Policy Institute (EPI) estimates that trade deficits “are likely to displace 159,000 U.S. jobs in the first seven years.”