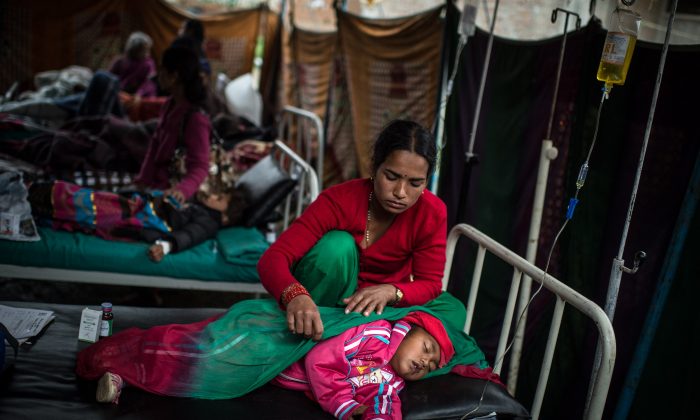 A woman takes care of her daughter as she lies in bed at a temporary hospital suffering from typhoid fever on April 30, 2015, just days after a devastating earthquake struck Nepal near Kathmandu. (David Ramos/Getty Images)
Health & Safety

The bacteria that cause typhoid fever have grown “increasingly antimicrobial-resistant” and have spread to several countries over the past 30 years, according to a study published in The Lancet Microbe journal on June 21.

Typhoid fever is a life-threatening infection caused by salmonella typhi (S. typhi), which typically spreads through contaminated food or water.

While there has been a declining trend of multidrug-resistant typhoid in South Asia, researchers have discovered that strains resistant to fluoroquinolone and quinolone—both of which are important antibiotics—have risen and spread widely.

“We identified numerous international and intercontinental transfers of S Typhi over the past 30 years, with the majority associated with antimicrobial resistance,” they stated in the Lancet Microbe study.

Typhoid fever is a global health concern that has resulted in 11 million cases and over 100,000 deaths annually. South Asia has the highest incidence rate, accounting for 70 percent of the global disease burden.

The study revealed that substantial morbidity and mortality also occur in sub-Saharan Africa, Southeast Asia, and Oceania, underscoring the need to examine typhoid control strategies through a global rather than country-specific lens.

The researchers sequenced the genome of 3,489 S. typhi blood samples isolated from four of the highest typhoid burden countries—Bangladesh, Nepal, Pakistan, and India—and combined them with a global collection of 4,169 sequenced strains isolated between 1905 and 2018.

They concluded that South Asia remains a crucial hub for the generation of antimicrobial resistance and that the clones emerging in the region regularly move internationally.

“The spread of S Typhi within and from South Asia might be linked to migration patterns, both between countries in South Asia and to other regions such as East Africa and Southeast Asia, where S Typhi was able to spread due to poor water and sanitation infrastructure,” the researchers said.

According to the Centers for Disease Control and Prevention (CDC), typhoid and paratyphoid fever are most common in South Asia, Africa, the Caribbean, Central and South America, and the Middle East.

The CDC said that about 350 people are diagnosed with typhoid fever in the United States every year, most of whom traveled abroad.

Typhoid symptoms include prolonged fever, fatigue, headache, nausea, abdominal pain, and constipation. Some may develop a rash, while severe cases can cause internal bleeding or even death.

The World Health Organization (WHO) stated on its website that typhoid fever can be treated with antibiotics but that “increasing resistance to different types of antibiotics is making treatment more complicated.”

“Even when the symptoms go away, people may still be carrying typhoid bacteria, meaning they can spread it to others through their feces,” the WHO stated.