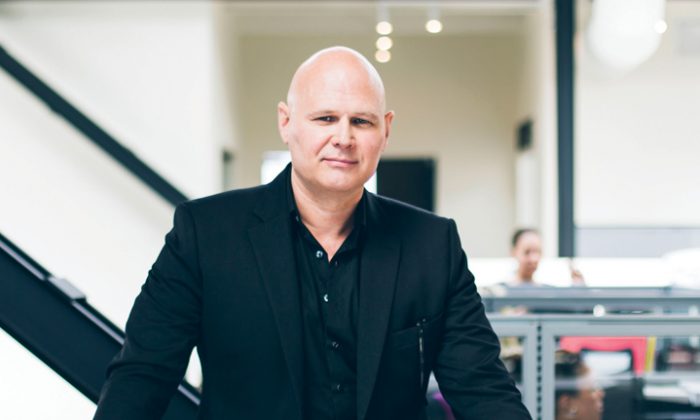 Lamb: Toronto Market ‘The Best It’s Ever Been’

“I was staying at the Viceroy Hotel, and in New York you never really know how a building looks from the outside because everything there is so high,” he tells Epoch Times in an interview at Lamb Development Corp.’s King West headquarters. “At one point I walked across the street, looked up and thought, ‘Holy (smokes), this is a really cool building'” (the new hotel on West 57th Street exudes a strong air of masculinity, with black steel framing its facade and industrial-style framed windows).

Lamb liked it so much he snapped a photo and sent it to one of his go-to architects, Peter Clewes, principal of architectsAlliance. “I told him, I want to do a building just like this in Toronto.”

The result is James, a 135-unit condo that’ll be “tall, dark, and handsome,” according to its marketing materials. Lamb notes he wanted the name to sound decidedly “manly, not feminine… inside I want it to feel like a private gentlemen’s club.”

He christened another of his new projects The Harlowe, after his daughter. Lamb’s wife was pregnant with her when they drove by the site—on Richmond just east of Bathurst—and she spotted the ‘for sale’ sign. “She was accustomed to bird-dogging for me,” he says.

The building, now under construction, is also New York-inspired. Lamb and his wife used to have a condo in Chelsea, and spent weekends strolling around the Meatpacking District. “I really like the historic low-rise red brick feel of a lot of that part of New York,” he says. “So I wanted to do something here with a similar warehouse-style of architecture.”

Which Core Architects has delivered with The Harlowe. Boasting 220 units and 200 feet of frontage along Bathurst, the building will look “monolithic and monotonous,” says Lamb, “and there’s beauty to that.”

His company is gearing up to launch Wellington House, a 23-storey condo between Portland and Spadina that’ll incorporate the last surviving grand mansion on Wellington Street West. Sales will also soon begin for Camden House, a mid-rise project at Brant and Camden Streets next door to the soon-to-be-built Ace Hotel. “It’ll be good for the neighbourhood,” Lamb says of the super-hip hotel’s arrival. “It’ll up the fun quotient.”

Lamb Development is coming off its biggest year ever for completions, with 1,100 units delivered at what its chief says are the “four best buildings we’ve done”: Theatre Park, a 47-storey tower next to the Royal Alexandra Theatre; King Charlotte, a 33-storey tower at King and Spadina; The Brant Park, an 11-storey building on Adelaide Street West; and in Ottawa, Gotham, a 17-storey tower.

Lamb admits it was stressful on his team to deliver that many suites at once. But things sound like they’ll only be ramping up from here. “It’s my plan to get us out of the hundreds of millions in development and into the billions,” he says. “I’d like to be one of the largest development companies—whether it’s public or private—in the country.”

At the moment the firm is focused on vertical integration, moving in-house operations such as marketing, customer service, development management, and labour. Lamb Development even has its own construction arm, Elcium.

Meanwhile, the company has projects on the go in Ottawa (three buildings: Gotham, SoBa and Bronson) and out west in Calgary (6th and Tenth and The Orchard, a two-tower community that’ll have its own apple orchard) and Edmonton (two buildings, one the city’s tallest to date: 37-storey Jasper House).

But Lamb makes it clear most of his future development will be concentrated in Toronto. “Closer to home is easier to manage,” he says. Plus TO’s real estate market—a safe haven for foreign capital, particularly Asian—is piping hot. “The market’s never been better in the history of the city. It’s the best it’s ever been.”

That makes it a good time for his company to be embarking upon its largest project ever, East Fifty Five, a 25-storey tower proposed for Ontario Street between Richmond and Adelaide. With 300 suites (60 percent of them already sold), “it’s the single biggest one-phase project we’ve done from a unit count perspective,” says Lamb, noting East Fifty Five’s name emphasizes the building’s location in the heart of Toronto’s emerging Lower East Side. The city’s eastern flank has been gathering serious momentum, but Lamb’s been big on the area for a decade, having built five projects there (as far east as Carlaw Avenue).

“I was never hesitant to look at stuff in the east end,” he says. “Anything within a 10-minute drive of downtown is going to be a great place to live.”