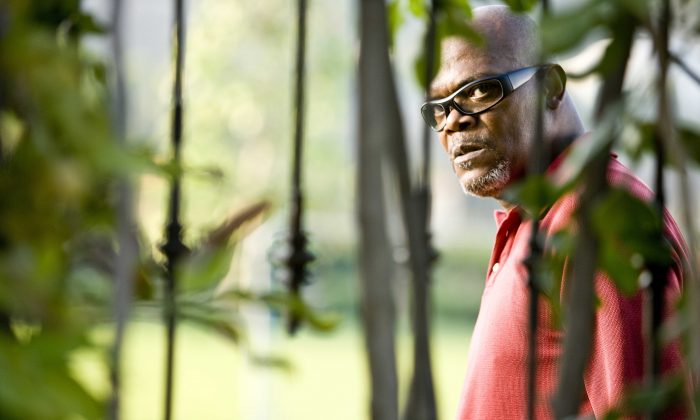 By Matthew Rodgers
Print
Neil LaBute moves from the smouldering ashes of the much-maligned, reputation battering The Wicker Man, to another tale in which fire features prominently, both in the burning California setting, and the flickers of anger stoking Samuel L. Jackson’s genuinely freaky central performance. Welcome to Lakeview Terrace.

This could best be described as “Widowed Black Male”, as it harks back to a time when home and life intrusion thrillers such as Unlawful Entry and Single White Female flirted with the movie-going consciousness. Jackson’s overbearing cop, Abel Turner, takes a distinct dislike to new interracial couple, Chris and Lisa (Patrick Wilson and Kerry Washington) when they move into his ‘hood. Swimming pool frolics and cigarette butts on the lawn do little to endear them to him, and before long he is shining security lights through their window at the start of an ever escalating campaign of terror.

Despite all its clichés and the feeling that you’ve seen it all before, Lakeview Terrace is worth looking around thanks to a great performance from Jackson. All bristling rage, tilted head and bulging eyeballs, he is a typical LaBute creation of imposing masculinity, sometimes threatening to substitute tension with laughter because of the ludicrous nature of some of his actions. Abel is a real cartoonish bogeyman by the time the overblown denouement occurs, so it’s thanks to Jackson that you retain interest in the narrative till the end.

Lakeview Terrace’s real dilemma is finding a likeable character, and Wilson’s white collar do-gooder isn’t any more appealing than Jackson’s psycho; he’s far too insecure and whiny. All the initial promise can be found in Washington’s headstrong housewife: likeably feisty, unfazed by the furore surrounding Abel’s antics and realistic towards the racial prejudice of being with Chris. That said, she soon wilts to trembling victim number one as LaBute concentrates on his – admittedly entertaining – butting alpha males.

If anything, LaBute is attempting to address too much. Is this a straight forward neighbours-gone-nasty thriller or a slow burning commentary on racial, sexual and gender politics? The answer is it’s all of them, so ultimately the tone is a bit haphazard. Much like Abel himself, one minute he’s soliloquising about life while staring at the bottom of a whiskey glass, the next he’s comically shaking down a criminal who reveals he’s “one seventeenth Cherokee”.

Recommended for the chance to watch Jackson let loose with his most charismatic turn since The Long Kiss Goodnight, this is thoroughly flawed, yet somewhat polished, Friday night fare.