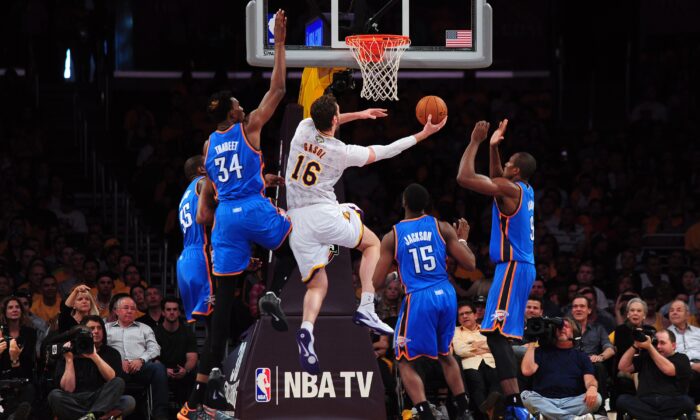 Pau Gasol of the Los Angeles Lakers (No. 16) drives to the hoop under pressure from Kevin Durant (No. 34), Hasheem Thabeet (No. 34), Reggie Jackson (No. 15) and Serge Ibaka (R) of the Oklahoma City Thunder during their NBA matchup at Staples Center in Los Angeles on March 9, 2014. (Frederic J. Brown/AFP via Getty Images)
NBA

Nearly a full year after retiring from basketball after 18 NBA seasons, which included back-to-back championships with the Los Angeles Lakers, the team announced on Aug. 17 that it will retire Pau Gasol’s No. 16 in March.

Gasol, who turned 42 last month, will have his number raised to the rafters at Crypto.com Arena in Los Angeles as the Lakers host Gasol’s first team in the league–the Memphis Grizzlies–on March 7.

Gasol will become the 11th Lakers player to have his number retired, and the fourth center along with Hall of Famers Kareem Abdul-Jabbar, Shaquille O’Neal and Wilt Chamberlain.

“Beyond thankful and honored!!!” Gasol posted on Twitter in response.

The 7-foot-1 Spanish native announced his retirement last October after a decorated career that included six All-Star Game selections, three of those with the Lakers.

He was the No. 3 overall selection of the 2001 NBA Draft by the Atlanta Hawks but was dealt to the Grizzlies on draft day.

After averaging 18.8 points and 8.6 rebounds per game in his seven-plus seasons in Memphis, a trade-deadline deal shipping him to the Lakers in February 2008 altered the course of the league–and the Lakers.

Gasol is one of just four NBA players to record more than 20,000 points, 11,000 rebounds, 3,500 assists and 1,500 blocks in a career, joining Lakers legend Abdul-Jabbar and Hall of Famers Tim Duncan and Kevin Garnett.

Gasol won two Olympic silver medals and one bronze with Spain and is remembered as one of the best passing centers in NBA history.