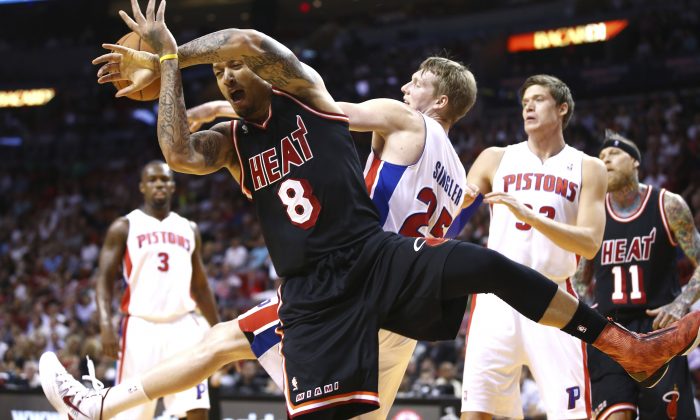 Lakers rumors: The Los Angeles Lakers could still be looking at the prospect of signing forward Michael Beasley. Miami Heat's Michael Beasley (8) and Detroit Pistons' Kyle Singler (25) fight for control of the ball during the first half of a NBA basketball game in Miami, Monday, Feb. 3, 2014. (AP Photo/J Pat Carter)
US

The Los Angeles Lakers could still be looking at the prospect of signing forward Michael Beasley.

Beasley, who played for the Miami Heat last season but is without a contract, has been rumored to be on the radar for the Lakers.

There’s been little interest from most NBA teams for the former No. 2 overall pick out of Kansas State.

But according to a report from FanSided, the Lakers are “still in [the] mix” for signing Beasley.

The Lakers recently signed forward Carlos Boozer and guard Jeremy Lin. The team also re-signed Nick Young, who was the lone bright spot on the roster last season. “No tats on the right arm Strictly for buckets,” he tweeted recently.

Byron Scott, the new head coach, has stressed on a number of occasions that defense is the No. 1 priority next season. On Monday, ESPN reported that the Lakers are slated to add assistant Jim Eyen to Scott’s coaching staff.

According to ESPN, Kobe Bryant is poised to finish the 2014-2015 season with third place in the all-time scoring books. If he averages 20 points per game, he can pass Michael Jordan–the current third-place holder–in the 29th or 30th game.

Ahead of Jordan on the all-time list are Karl Malone and Kareem Abdul-Jabbar. Bryant, who is 35, would have to play a few more years to hope even catching up with Malone.

As ESPN notes, “But what about the other two spots on the list? Bryant signed a two-year, $48.5 million extension last December, ensuring himself at least 164 more games to jack up his total. But will his health hold up? Will he be able to still score like he used to as he creeps toward 40?”