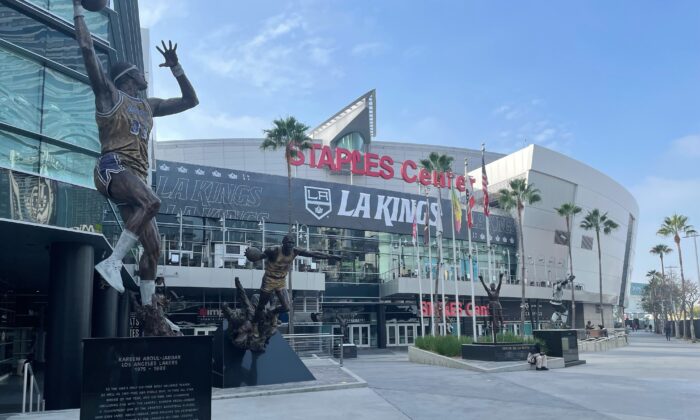 The Lakers host the San Antonio Spurs in the 7:30 p.m. game and plan a number of sendoff festivities for their finale under the “Staples” banner.

The Lakers are scheduled to host the Brooklyn Nets on Christmas Day in the first game played at Crypto.com Arena, but that game is in danger of being postponed, as the Nets’ roster has been devastated by the coronavirus surge.

Brooklyn’s scheduled Thursday night game in Portland was postponed by the NBA on Wednesday—which becomes the third straight Nets game that was postponed—with the Nets not having the league minimum of eight players available. The Nets have signed several “hardship replacements.” As of Wednesday, the Christmas Day game was still a go.

The Lakers’ next scheduled home game after that is on New Year’s Eve against the Portland Trail Blazers.

The Clippers, who also call the arena home, are scheduled to host the Denver Nuggets on Dec. 26.

The National Hockey League’s (NHL) Los Angeles Kings, another tenant of the arena, are scheduled to host the Las Vegas Golden Knights at Crypto.com Arena on Dec. 28.

Crypto.com, which bills itself as the fastest-growing cryptocurrency platform, is beginning a 20-year naming rights agreement with Anschutz Entertainment Group, the arena’s owner.

A new logo and other branding assets, including internal arena signage, will be introduced on Christmas Day if the game goes off as planned. All of the venue’s external signage will be replaced by June.

The agreement, announced Nov. 17, makes Crypto.com an official cryptocurrency platform partner of the Lakers and Kings and also includes official designations across Crypto.com Arena, L.A. LIVE, Microsoft Theater, The Novo, the Lakers, and the Kings.

Terms of the agreement were not announced, though the Los Angeles Times reported Crypto.com paid more than $700 million for the naming rights, according to sources familiar with the terms. That would make it one of the biggest naming deals in sports history.

The Singapore-based Crypto.com claims to have more than 10 million customers and employs more than 2,600 people in offices across the Americas, Europe, and Asia.