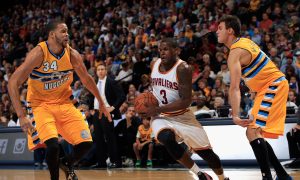 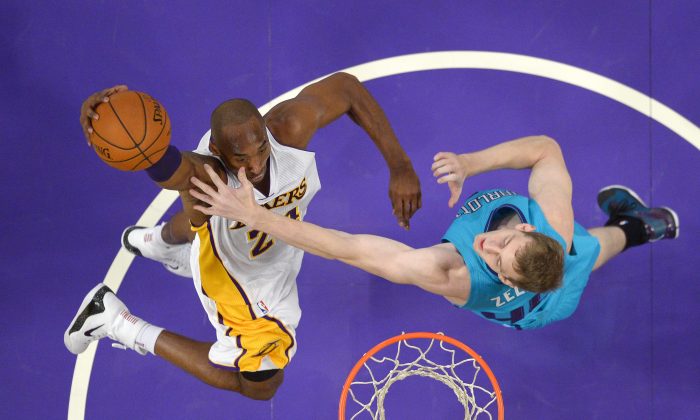 The Los Angeles Lakers got their first win over the weekend and will be looking to get another as a spate of news and trade rumors come out.

The speculation about Kobe Bryant leaving the Lakers–which would involve him revoking his no-trade clause–has been steadily increasing lately, prompting Bryant to reiterate publicly that he has no plans to depart the team.

“It’s not going to happen,” Bryant told USA Today when asked if the temptation to change teams might still grow from here.

Bryant previously admitted to Yahoo that he’s heard about the chatter but that he’s not going to leave because he believes in sticking with the organization through both the good and bad times.

Bryant did say that he can’t envision playing beyond his current contract, which is for this season and the next.

Jeanie Buss recently expressed a desire to re-sign Kobe if he does decide to play longer in the NBA.

The latest speculation involving Kevin Love has him opting out of the final year of his contract and heading to the Lakers in the offseason.

“It’s not going to get as much discussion during the season, but one of the biggest issues for the Cavs is that both LeBron James and Kevin Love own opt outs after this season. LeBron James basically cannot afford to go anywhere after his return to Cleveland. But watch out for Love. Indications are he will seriously consider the opt out and has his eyes on a return to Los Angeles, where he attended college and where the Lakers long have had him on their free agent wish list,” according to NBA writer Sam Smith.

The opt out was an issue when the Minnesota Timberwolves were trying to trade Love, essentially forcing whatever team that received the forward to secure an agreement that he would re-sign with them.

That’s what the Cavs did. Yahoo Sports said that the two sides reached “a firm agreement Love will opt out of his contract in 2015 and re-sign with the Cavaliers on a five-year, $120 million-plus contract extension.”

But other reports have linked Love to the Lakers.

Before he was traded, some executives told CBS that Love had a desire to go to the Lakers.

“They should trade him,” one Eastern Conference executive said. “No one thinks he’s staying. Everyone knows he wants to go to the Lakers.”

The Lakers will have a lot of cap space next summer and are going to be looking for a big free agent. Love fits the bill.

Jeremy Lin is starting to come into his own and helped the Lakers secure their first win.

Lin ended the night with 21 points off 8-12 shooting, including 3-6 from 3-point range. He scored the same amount of points as Kobe but with eight fewer shots.

Lin said that he’s been getting more aggressive as the season goes on.

“The first two games of the season I wasn’t aggressive. The game against Golden State I was fake aggressive, passively-aggressive,” he told reporters, reported Lakers Nation.

“The other three games I thought I was very aggressive out the gate. I felt like my aggressiveness was the same in those three games.”

The Lakers are shopping Steve Nash’s expiring contract in the hopes of acquiring a player or two in a trade.

Nash has $9.7 million coming this year but expiring contracts are valuable with teams always looking to unload players who they don’t want anymore.

ESPN also reported that the Lakers were granted a Disable Player Exception by the NBA for the injury suffered by rookie Julius Randle.

The team can use the exception to sign a free-agent replacement for Randle worth up to $1,498,680, which amounts to 50 percent of Randle’s rookie salary.

If a trade doesn’t work out with Nash, the Lakers could seek another exception.