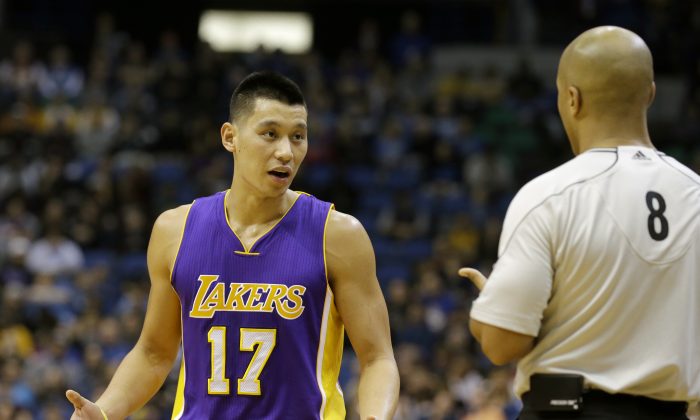 The Los Angeles Lakers are preparing for their next game as the news and rumors ramp up.

Jeremy Lin and Carlos Boozer were recently replaced in the Lakers starting lineup, but they’ve responded differently to the demotions.

Lin requested a meeting with coach Byron Scott and called it “one of the toughest situations I’ve been in.

But it’s their on-court play that has differed the most, with Boozer greatly improving. He’s averaging 15.2 points and 10.2 rebounds after getting benched, and shooting 54.2 percent from the field.

“That’s exactly how you want him to respond,” Scott said. “After a game or so, it seemed like he just said, ‘OK, this is how it’s going to be. I’m going to roll with it.'”

Lin has slumped badly, averaging six points and 4.6 assists while shooting only 28.6 percent. That included an 0-6 night in the recent loss to the Indiana Pacers.

I don’t know. He’s just been up and down,” Scott told the Los Angeles Times. “Sometimes he has nights like this.”

The Times notes that Lin, who was portrayed as a possible player to build around for the Lakers, “feels more and more like a one-year rental.” His contract expires after this season.

On the other hand, the Lakers could swing a deal for a point guard because Lin’s replacement Ronnie Price isn’t doing much better, averaging just 2.4 points and 2.8 assists since becoming the starter.

Players Could be Dealt

December 15 was the first day that some Lakers could be traded. The date marked the first day players who signed contracts over the summer could be moved.

Wayne Ellington and Price are eligible to be traded next week.

The team can’t deal Boozer, because he was acquired via amnesty waivers. Kobe Bryant can also not be dealt.

Lin, Robert Sacre, and Steve Nash have been eligible for trades the whole season.

“Nash has a 15% trade bonus in his contract, which applies only to the remainder of his contract for the season. If he were traded at the exact midway point of the season, the bonus would be based on half of his $9.7-million salary, or $727,575. Because Hill, Henry and Johnson re-signed on one-year deals, they can block any trade the Lakers might choose to make,” the Times noted.

“The Lakers can technically get around Hill’s veto power by opting him in to the second season of his contract, also at $9 million. The Lakers also have two disabled player exceptions, which can be used to acquire players in the final year of their contracts, one for Nash ($4.9 million) and Randle ($1.5 million). Nash is out with back issues while Randle broke his leg in the first game of the season.”

In Ellington’s case, the Lakers may have found a good role player who can be useful in the longer-term.

The Lakers are essentially auditioning most of their players for future years, apart from a few like Young.

Ellington is averaging 6.4 points a game in about 17 minutes of action.

Ellington actually played for Scott in the 2012-13 season while Scott was coaching the Cleveland Cavaliers, and Scott has praised his play this season.

“The former collegiate star will never be known as a volume scorer in the NBA, but he still has a pure outside stroke,” Bleacher noted.

“That doesn’t mean Ellington’s judicious finesse game always pays off. He can be streaky—shooting 1-of-11 over a three-game stretch, before making 3-of-5 in a loss to the Indiana Pacers Monday night. But despite the occasional drought, Ellington’s overall numbers lend credence to his efficiency. He’s averaging 47 percent from the field this season with a solid 37 percent from beyond the arc. Additionally, his turnover rate is the lowest of any active player on the roster.”