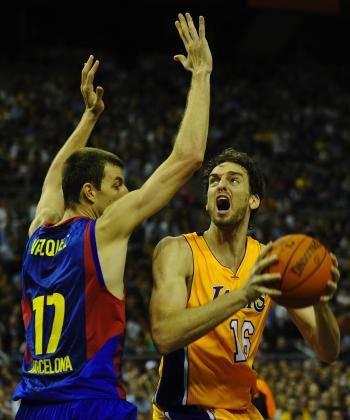 Barcelona, the Euroleague champion, was led in scoring by Juan Carlos Navarro with 25 points and Pete Mickael with 24 points, while Gasol led the Lakers with 24 points.

Kobe Bryant scored 15 points in 25 minutes of playing time as he eases back into a regular schedule while recovering from knee surgery.

Barcelona took charge of the game in the second half, overcoming a 12-point Lakers lead and tying the score up in the fourth quarter before they broke away.

Gasol received a warm welcome from his countrymen, but they didn’t let the big power forward off easy, double teaming him for much of the second half.

“It was a wonderful feeling to be so well supported and appreciated after so many years playing abroad,” Gasol said. “I am very proud to have been received in this way.”

“It was physical, and despite the fact we missed a lot of outside shots, we held on to get the win,” Navarro said.