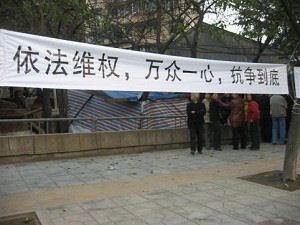 CHINA—On March 22, a land developer without warning lead about 200 people to forcefully demolish the employee housing of the Porcelain Enamel Product Corp. (PEPC) in Chongqing City, Southwest China. Their action triggered a conflict and bloodshed.

The PEPC was a state run enterprise that was bankrupted many years ago. Its employee's medical insurance and re-employment issues have not been resolved. In mid-March, PEPC's past employees set up banners in Beiqiaotou, Chongqing City, demanding that the regime resolve their benefit problems.

On the afternoon of March 20, about 200 people from the land developer—Yinxing Group, rushed into the PEPC employee housing compound and forcefully drove former PEPC employees out of their housing and started the demolition.

Currently, 53 families live in the employee housing, and according to them, the developer started the forced demolition without a permit, even the children and elderly were thrown out from their houses, and people were beaten for refusing to cooperate.

Police Attack Instead of Protecting People

According to a former employee surnamed He, a handicapped veteran named Zeng Chao was badly beaten by 6-7 people. He further stated, “Zeng Chao and his wife were badly beaten up by the demolition team and the police for using their cell phone camera to take photos. He is in very serious condition.”

Mr. He told Epoch Times journalist that they called the police but the police did not come initially. So they rang the mayor's public line and the Jiangbei region government office. The police came later but police beat them up instead of protecting them. Currently, three people are severely injured and hospitalized.

Those who suffered minor injuries did not go to the hospital because of their poverty. At present Zeng Chao, Zeng's wife, and Guo Zaifu are the only people being treated at the hospital.

Former employee Liu Wei said, “When the factory closed down, we were only paid several thousand yuan in compensation. Although we get 102 yuan (US$ 13) every month for living expenses, how can we afford medical expenses? Now that our workplace has shut down and the government does not care about us, how are we going to live?

“We rang the police but they ignored us. We rang the mayor's office, the light industry bureau and appeals office, but no one cares about us. We have no other means to live. The municipal government does not care for those without [political] power. We have no choice but to protest on the streets.”

Liu continued, “The factory has gone into liquidation and the cadre have now also disappeared. After being laid-off, we have no welfare security. Presently we can only do casual work to survive.”

According to Liu Wei, just three days ago, PEPC promised that the employee housing would not be demolished before the compensation issue was resolved. However, the developers were back within three days, this time with more than 200 who were acting like gangsters to evict the occupants and start the demolition.

According to Zhang Qi, a member of the Pan-Blue Coalition, before 1989, the textile and other light industries in Mainland China earned a lot of foreign exchange for the country.

After the Tiananmen Square Massacre in 1989, sanctions were imposed on Chinese enterprises by the international community. As the domestic demand was much less than the supply, many textile and light industries were forced into bankruptcy as a result of the international sanctions.

The Chongqing PEPC, which was a holding company under the textile and light industries bureau was one of them, becoming a scapegoat for the Chinese communist regime.

At its peak, the Chongqing PEPC employed as many as 5,000 people. After its bankruptcy, most of the laid-off workers had difficulty finding other employment. Some survived by doing casual jobs with low incomes and lived in poverty. In Chongqing, there are approximately 10,000 people in the same predicament.