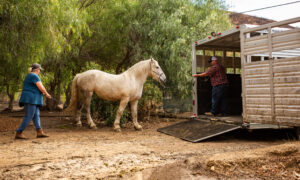 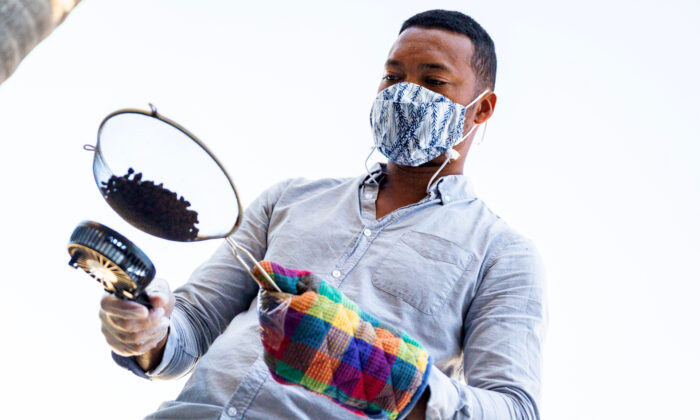 TRABUCO CANYON, Calif.—At the start of 2020, Azerone Perkins was looking forward to his best year ever.

He’d just been given a company car to use, along with a hefty performance-based raise, by a Southern California company that provided cold-brew coffee to tech companies and theme parks.

“For a natural cold-brew coffee company that supplied restaurants and offices and theme parks, our business got hit super hard,” Perkins told The Epoch Times. “I was working six days a week. When the pandemic hit, I was laid off.”

The respite gave Perkins time to contemplate his future. “I was praying to God and trying to figure everything out, and then it dawned on me. I had this impression that I know a lot about coffee from my last job, and thought, ‘Why not start my own coffee business and take it a step further?”

Perkins joined thousands of fellow Californians who applied for business licenses last year, up 22 percent from 2019, as budding entrepreneurs statewide have taken advantage of the unexpected calamity to revive long-dormant dreams and start enterprises of their own.

After Perkins lost his job, tough times followed. He joined thousands of other Californians seeking unemployment assistance, hoping to keep his pregnant wife and son financially afloat until he could find work. He never did. The small family eventually had to move into his parents’ home in Trabuco Canyon to avoid paying rent.

The move made Perkins realize what he had been missing. “It was the first time I had ever spent so much time with my family. … Up until that point, I had not ever spent a solid week with my son,”  he said.

Unable to find work and with plenty of time on his hands, Perkins decided to apply the expertise he had acquired at his previous job. He honed in on roasting his own coffee beans, a major part of the preparation process often overlooked by people who enjoy coffee.

Eventually, he determined his own optimal roasting conditions, perfecting the preferred taste by cooking beans in smaller batches and recording the heat temperatures that worked best.

After months of experimenting and perfecting his craft, Perkins was finally ready—and Thundercat Coffee Roasting Company was born at the start of 2021.

Launching a new company in the middle of uncertain times takes courage, but Perkins had help: A generous investor helped him assemble a strong team, including a brand designer and financial planner.

Perkins remains undaunted. “There are a lot of challenges for us ahead, but I have a dynamite team I’m a part of, and we shall overcome,” he said. People are staying home and afraid to go out, he added, stressing the need for new businesses to adapt their models accordingly.

“This is a new world. This pandemic has a new regard for how business is done in the world,” Perkins said. “People and businesses have been strongly impacted, and we have to change and adapt to the culture. The question I ask myself is: How do we cater to what people need during this time?”

For now, Perkins said he personally delivers all orders in Orange County or San Diego, while shipping all others. Within six months, he hopes to establish enough of an online presence to hire his first employee, obtain business space, and scale up output. In the meantime, he’s negotiating exclusive orders with four businesses in Orange County and another in Maryland.

During the roasting process, Perkins remains focused and undistracted. The songs of Frank Sinatra fill the air in his parent’s garage, which doubles as his studio, the sounds mixing with the sweet scent of coffee beans from Ethiopia—the source he’s chosen for the current batch.

“It’s origin-specific, you know,” he said of his flavors. “We’re not doing blends, at least not yet.” Perkins is currently sampling beans from all over the world; eventually he hopes to partner with a specific coffee farm.

As he churns the beans, Perkins uses a temperature gun to maintain the perfect roasting level, confident he will deliver the best-tasting coffee. “I’m excited for people to taste this fresh delicious coffee that I’m roasting and hearing feedback on it … because it’s so freaking great,” he said with a cavalier smile.

He said he expects people to fall in love with his product, just like he has.

A New Wave of Entrepreneurs

On Feb. 4, Perkins reached a milestone: his first sale. The 1-pound bag sold for $15, following an email blast letting people know he was open for business. The sale was made to someone who quickly texted back, letting him know they wanted to be his first customer.

“What started as just a thought became a reality with that first sale,” he said. “It was a monumental step … going from an idea, forming a team, and obtaining investments.”

Perkins said he hopes to stick with his Southern California roots, so he can bless his community and neighbors with the quality coffee he thinks they deserve.

“I think if people love handcrafted kinds of beverages and food, Orange County and San Diego is where you’re going to find those people who love that style,” he said. “And we’re giving you that quality of coffee.”

As Perkins wrapped up a session of roasting, his wife and children came out to join him. They played in the driveway as he prepared to clean up his work space—something that couldn’t have happened a year earlier when he worked for his former company.

“Coffee gets you in a certain mindset to tackle whatever’s in front of you, and that’s my favorite thing about coffee,” Perkins said. “I can enjoy a horrible cup of coffee or a great cup of coffee; it’s the feel of it [that] helps me get into a certain frame of mind.”

For now, Perkins said he is roasting around 5 pounds of beans per week, but expects that amount to grow as word-of-mouth and social media campaigns take hold. He especially hopes local essential workers discover his online presence soon.

“My goal is to be able to get this fresh cup of coffee to people who are working, and working in the essential worker world,” he said. If they are in Orange County or San Diego, he’s likely to bring it to them personally.

Thundercat Roasting Coffee Company is now accepting online orders at Thundercatroasting.com, or people can follow its journey on Instagram at @ThunderCatRoasting.