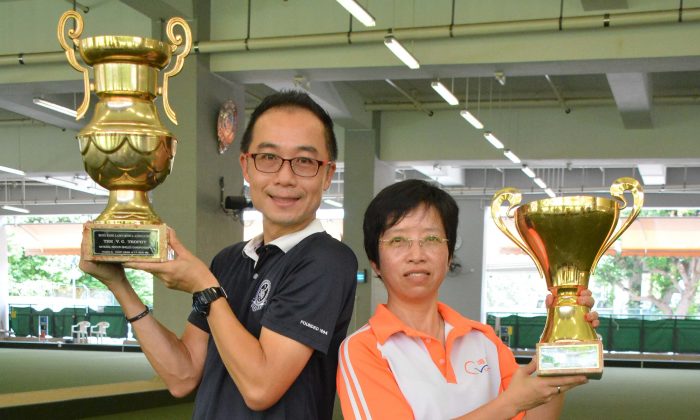 Hong Kong international Stanley Lai won his second major title in the space of two weeks, with the National Indoor Singles newly added to his collection, on Saturday July 16 at Club de Recreio.

Lai, partnered with his Craigengower Cricket Club teammate Imen Tang to lift the National Pairs at the Finals Day earlier this month.

In the semi-finals, Lai played clubmate Robin Chok, a three time U25 Singles champion. The game was tight and Lai need a tie-breaker to beat his opponent and progress to the final.

He met 2013 winner C L Fung of Club de Recreio in the final, who defeated Kenny Tam from Hong Kong Football Club in the semi-final.

The final was a battle between home green advantage and extensive experience and both sides displayed highly accurate drawing skill and aggressive attacking shots throughout.  The first set was tight and was tied at 5:5 with the last end to play. Lai drew a single shot with his first bowl which remained till the end to win the set.

In the second set Fung performed much better, playing to a length more suitable to his play and successfully pulled a set back.

Into the tie-breaker, Fung decided to give the jack to Lai after winning the toss, a decision he regretted afterward. Lai took the chance to adjust to his favourite distance and won four shots in the first two ends. Fung could only pull two shots back in the last end and had to settle for the runners-up position,

Lai attributed his success to a change of tactics during the game, “Fung is very familiar with the venue and can play some shots that I am not able to do, especially when the distance is from T to T [the longest distance]. What I could do is keep changing the length and play on his favourite hand to force him to change hand.

“These actions affected his performance a bit and allow me to take the chance to win the game,” said a satisfied Lai.

Fung admitted that his decision of giving Lai the jack at the tie-breaker was a wrong decision, “I should have kept it and played a long jack to extend my advantage.  This would have given me a better chance but it is too late now.  Overall I am happy with my performance today because I played my normal shots well”.

In the women’s tournament, Queenie Lai of Seabird Sports Club took her second title. Lai was runner-up last year and last won it in 2008.  She played Celena Kwok of Hong Kong Football Club in the final. Her drawing was superb throughout and she won in 2 straight sets 11-4, 8-3.

She thought that a tough semi-final helped her to win the final, “The semi-final was difficult because I could not find the green.  I can just play with some promotion shots and was lucky I get the result.  When I got to the final I started to find the right green so I won it more easily”.

The U25 Age Group Lawn Bowls Championship takes place at Tsueng Kwan O Lawn Bowling Green from 9am to 6pm, on Sunday July 24.